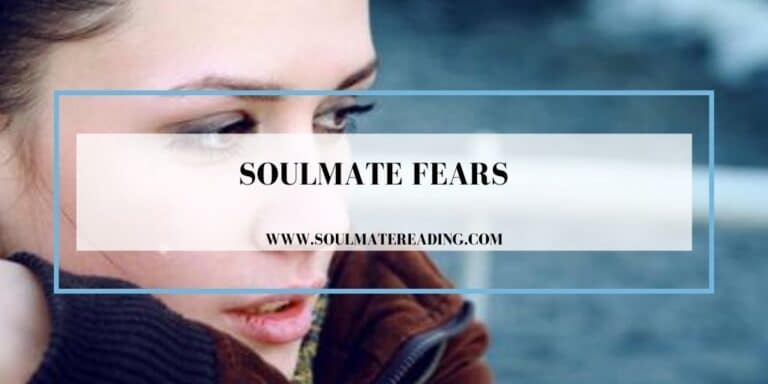 Soulmate fears are one of the top challenges soulmates must face.

When both the emotional and logical sides of soulmates are often at odds with one another, fears will rise to the surface. If those fears get out of control, the relationship often goes out of control. When our emotions get the better of us, and the mind comes into play, the mind can often create fears that spin things off their axis.

The stronger the emotion, the bigger the fear. The more those fears grow, the worse they can affect a soulmate relationship.

One of the top soulmate fears is questioning that what you feel can’t be real. This can also manifest the fear that their partner’s feelings can’t be real. Logic can’t explain the connection and emotions soulmate’s feel for one another.

Since logic can’t explain it, soulmates often think they’re going crazy and need to snap out of it. They may pull away or even disappear for a while. Frequently they also deny their feelings for their soulmate and the connection. Then the chaos really begins.

If a soulmate fears their feelings can’t be real, the next fear to rear its ugly head is that the feelings won’t last. They fear these feelings may change easily or quickly. This fear breeds insecurity, which always does a number on the person themselves and the relationship. Both tend to change dynamics for the worse. Constant worrying that the happiness they feel will not last, brings them eventually to the third soulmate fear.

Now that a soulmate fears the feelings may not last, they fear they will be hurt. Are they willing to face that fear? No, it scares them immensely. So, again the fear grows.

Then they may try to test one another in order to prove how strong the love or connection is. They think this will ease their mind, but it’s quite the opposite. Once the test is done the damage is done too, which only breeds more insecurity. These tests never remove insecurities, so they’re often repeated, which makes for a dysfunctional relationship with no room for growth.

Soulmate fears also lead to a soulmate pulling a runner. Sometimes emotions can’t handle the fears manifested in the mind. And so, in their mind, it all becomes too much for them. Fight or flight kicks in. They simply run away and hide or even walk out the door overnight!

They don’t answer calls, delete you off social media, and go totally MIA. You may have experienced a soulmate running away and it’s excruciating. When you think of reasons why they left, your emotions are a wreck, which creates the next soulmate fear.

This is a very destructive fear. Soulmate relationships are supposed to have challenges so they can change us for the better. If we do not challenge ourselves or our partners to be better, it often causes our problems to continue or get worse. When we enable our relationship to stay dysfunctional, it can never get better. We avoid the very lessons that are meant to teach us, which misses the point entirely.

Fear leads many couples down a destructive path. Soulmates need to have more faith, and less fear, to get their relationships moving in the right direction.

8 thoughts on “Soulmate Fears Can Ruin a Soulmate Relationship”