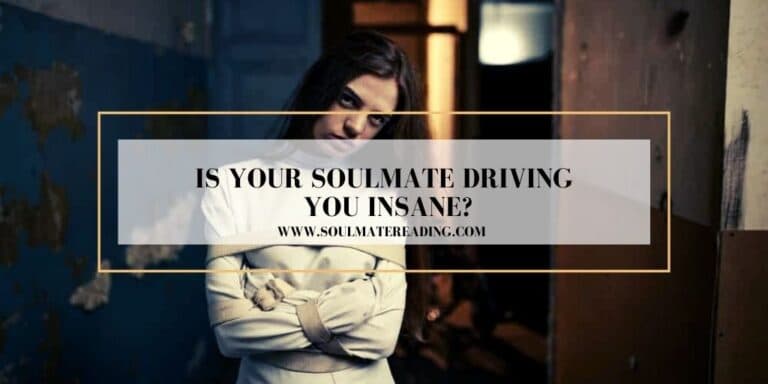 Is your soulmate driving you insane? Has your soulmate’s antics sent you over the edge and you don’t have an ounce of sanity left?

Your soulmate was once a normal person and a major source of joy in your life. You thank your lucky stars you’ve the opportunity to experience love on such a deep level. But now they’re acting so crazy you can’t understand them no matter how hard you try.

The connection between you is no longer a source of happiness, but sadness. What do you do when your soulmate’s behavior gets so out of hand that you feel like you no longer recognize them?

It’s not exactly a rare situation when a soulmate drives you insane. It happens all the time, unfortunately, to many soulmate couples. When you first meet you can feel a little out of touch with reality. You feel and experience a strong bond and you can’t get your soulmate out of your head. You feel like a different person and you act like a different person as well. People describe you as “crazy in love.” That’s the fun part.

The not so fun part is when your soulmate brings drama and games into the relationship. At first it seemed you were both on the same page. They said they felt the same way you did, but now they’re questioning or denying their feelings for you. And they often doubt the connection between you as well. You were on top of the world and now the rug has been yanked out from under you. You wonder if it was ever real, and may find yourself asking “who IS this person and where did my soulmate go?”

It’s as if you have been transported to an alternate universe and it’s driving you insane and stressing you out. So what do you do?

HOW TO DEAL WITH YOU SOULMATE DRIVING YOU INSANE

The first thing you need to do is understand and accept you’re not alone. Don’t read too much into it or obsess about it. You can’t rationalize their irrational behavior. Doing so will make you act irrational too. Try to be the voice of reason, if not to them, but to yourself. Don’t fall for their ridiculous words or feed into their negative behavior.

Their wackiness make you feel insecure, but try not to go down that road. Blaming yourself is not productive and you can’t control or change them right now. Let them work through it, as it is their work to do, not yours. They’re flipping out right now, and although it may scare you, leave them be. Don’t involve yourself too much, and don’t engage in conversations with them attempting to change their minds because it just fans the flames.

Pull back and let them spin out of control all by themselves.

There’s no need for you to go to crazy town with them. It’s hard to sit idly by but it’s easy to let your soulmate drive you insane. You can’t convince someone in a state like this that they’re wrong or feeling the wrong things. They’re trying to figure this whole thing out.

You may desperately want to make them understand the connection or try to explain it to them. You can’t. They don’t want to hear it right now and will instead get into a debate with you. Try to come up with excuses to avoid long talks when they’re talking irrationally. Become very busy when they want to talk in person when you know it will end badly. Avoid their emotional landmines.

Don’t jump at the chance to go toe to toe with them thinking you can make a difference. You can’t. They will be too busy trying to convince you and themselves what they’re doing is sane. Don’t fall for it and don’t accept it. You don’t want this behavior to become habitual or a pattern. Just because they’re your soulmate doesn’t mean you have to accept their behavior.

It’s up to you to let them find their groove. It’s not up to you to explain it all to them or to teach their lesson. So keep your head held high and don’t join them in lower vibration behavior. Let them learn from your example. Don’t immediately let fear and insecurity creep up so that you do the wrong things.