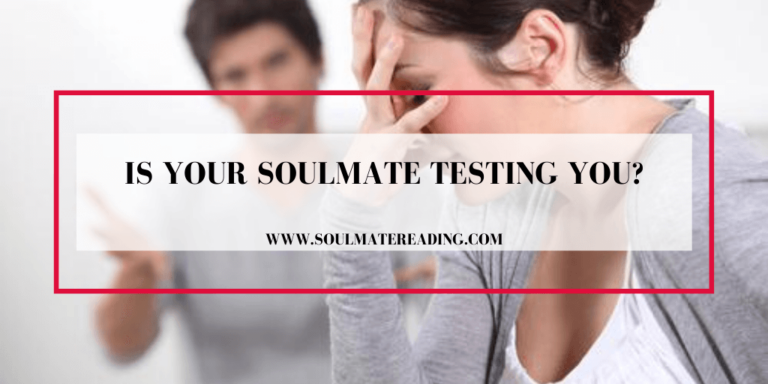 Is your soulmate testing you?

You may not even be aware these tests are even happening. If you keep failing these tests, your soulmate relationship will suffer greatly.

SOULMATE TESTING YOU WITH BOUNDARIES

Soulmates tend to test one another by using boundaries. They want to see just how much you will tolerate as well as what they can get away with.

These tests may start small, with a minor indiscretion. They want to see your reaction and if there will be any consequences to their actions or words.

So many soulmates fail these tests right from the beginning. They are over the moon to meet their soulmate. Everything between them has been so great thus far. So when a soulmate tries testing proper relationship boundaries, there’s a tendency to let it slide.

This is a huge mistake.

It’s the first time you will teach you accept their bad behavior. The next time they will push those boundaries even further. And it will be worse next time. Your soulmate will learn now a second time, what you will do about it.

Will there be any consequences other than you verbalizing your displeasure? No? Well then fully anticipate the next test and expect them to keep coming. Until you enforce the boundaries properly, you are helping to create what will become a toxic relationship.

You have many opportunities to do what’s right, yet you continue failing. It’s not all your fault, but your personal boundaries. It’s up to you to create and enforce them. Why do you allow your soulmate to slide and think there will be no repercussions?

Logically, that does not make sense. As children we test the boundaries of our parents, to see what we can get away with. We continue to do that on different levels with all our relationships through life. It’s not always a negative thing, unless we take advantage of it.

Which is what your soulmate does.

That’s where they’re wrong. You’re doing wrong by allowing your fear, insecurity, or whatever it is within you that allows them to get away with it. As a soulmate couple following a spiritual path you should both raise your standards of behavior. Once spiritual partners deviate off that path, the relationship falls apart.

The universe does throw some tests at every soulmate couple.

They’re supposed to work together, as a team, to overcome them. By supporting and turning towards one another they will pass the tests.

But when soulmates turn away from one another, they fail them. Look at the times the couple faced a crisis.

Let’s say one of them lost their job and it seriously affects their standard of living. Does the other soulmate offer support? Was that support accepted? Or did the soulmate who lost their job withdraw or become argumentative?

If the couple works though the tough times as a united force, they make it through troubling times and come out stronger than ever. When soulmate couples turn on one another instead, they cause devastating damage to the relationship. It’s very difficult to heal the damage that has been done without a lot of time and effort.

Look at the tests that keep presenting themselves in your soulmate relationship. If your soulmate is testing you, it’s up to you do things differently from here on out. You need to do what you should have done all along. It’s time you placed some reasonable boundaries in your relationship and prepare yourself to enforce them as well.

3 thoughts on “Is Your Soulmate Testing You?”