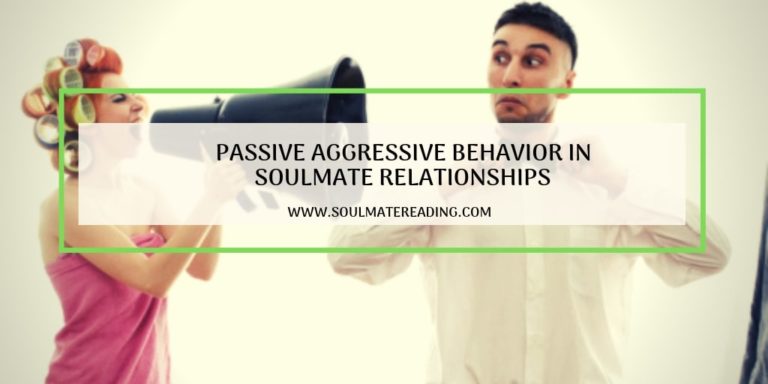 It can be difficult to spot passive aggressive behavior between soulmates because of the subtle nature of the behavior. In other relationships your partner may have been passive aggressive toward you. And you still don’t realize it even happened to you.

There is often a fear of using a direct, adult way of communication. So instead soulmates act out with passive aggressiveness. Since the issues are not being dealt with like adults, they pretty much no chance of being solved. If you don’t solve a problem, it keeps doing damage in the relationship.

Yes, they were supportive when you spent all weekend doing your taxes but then forgot to mail them out for you by the deadline. And when you get upset, they turn it on you. If it was so important, why didn’t you mail it yourself? It was an innocent mistake. How could you even think they would do something like that on purpose? Now you’re the bad guy. That is passive aggression 101.

EVERYTHING IS YOUR FAULT

Passive aggressive soulmates always turn the tables and make everything your fault. Nothing is ever their fault. And they will never take full responsibility for anything. They will always distract you with something you did wrong in the past. Or say anything they can think of to get you to defend yourself, taking the heat off them. You will apologize all the time for things they never let go of. These relationships are very dysfunctional.

You’ll get to a point where you don’t bother bringing things up. You won’t express yourself to them about things that are upsetting. Because you know it will just wind up backfiring in your face. This is very damaging to a soulmate relationship. Neither of you are dealing with the problems and solving them. Passive aggressive soulmates know the buttons to push to force you to react. Then the focus will become all about your reaction. And not about the fact they push your buttons over and over again wanting you to react. The relationship has now become a toxic one.

NOW THEY PUNISH YOU

A passive aggressive soulmate will usually make you pay for their hurt feelings. They will blame you for their anger. They’ll find a way to pay you back. They will either sulk and not tell you why they’re acting strangely. Or they will withdraw affection and say they’re not feeling well. Because God forbid they discuss the issue head on. It may take many months before payback time.

For instance, let’s say they have tickets to a special event. The night of the event one of their parents is rushed to the emergency room. It’s not serious. But of course they forgo attending the event and go to the hospital. Totally understandable and no ones fault. They could wait to go to the hospital after the event, knowing the parent was not in physical danger. Their siblings are already at the hospital. So the other soulmate will say they understand. But four months later they will suddenly fall ill or get stuck in traffic so their soulmate is late or misses an important event. This is how their payback works.

Passive aggressive soulmates expect you to have psychic ability to read their minds and predict their emotions at all times. They feel you should know exactly how they will feel when they do or say “whatever”. So, since you should have known better, you obviously did it on purpose to upset them. Try arguing your way out that. Good luck to you, because you will never win with that faulty logic.

Passive aggressive soulmates will also procrastinate until the last-minute to get your stress levels as high as possible.  God forbid they do something you feel is important right away. They put it off until the last possible moment to get a reaction out of you. And when you do, it gets turned on you immediately. Once again you’re the bad guy, because they would have gotten it done if you weren’t so impatient. And now that you acted out, they’re not going to do it because they are mad at you.

Passive aggressive soulmates will make you feel guilty for being happy. You may feel uncomfortable telling your soulmate the great things going on your life. They may try to make you feel selfish for being happy and talking about accomplishments or good fortune. Because you’re making it all about you. In reality they’re making your good times all about your relationship.

It’s so hard to change the dynamics of passive aggressive behavior in any relationship, including soulmate relationships. The first step is to recognize it and then next is to call it out. You need to try to discuss these behavioral patterns and find ways to change them. Take steps to try to mend this dysfunctional situation. Stop reacting, and stop defending yourself all the time. Keep the focus on the issue at hand and don’t let the discussion get off track.