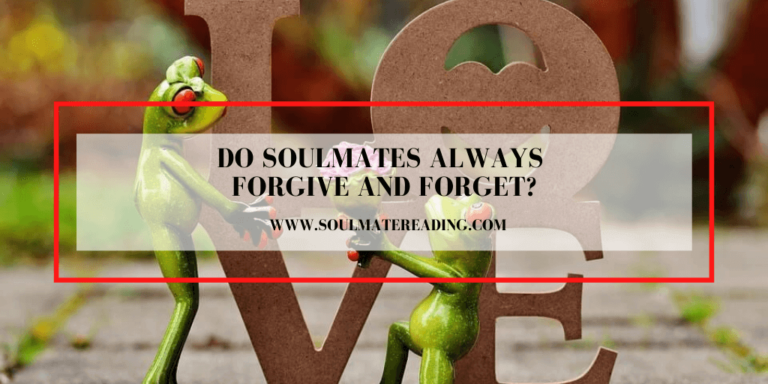 FORGIVE AND FORGET IF THEIR APOLOGY IS REAL

A soulmate connection doesn’t give you a free pass to act out and treat your soulmate with disrespect or neglect. Soulmates tend to bend their normal relationship rules and let their soulmate cross boundaries. And they don’t properly enforce those boundaries. Simply put they’re just too nice to their soulmate. Why is that? The answer is simply the fear of losing their soulmate. Which is ridiculous when you think about.

Your soulmate is treating you badly. But you’re afraid you’ll lose them if you make them stop treating you badly? They aren’t afraid to lose you. And they are the one doing something wrong! You should never be afraid of standing up for what is right for you. Especially when someone is not doing right by you. How can you expect to have a healthy and happy soulmate relationship when you won’t establish and enforce boundaries? It’s impossible to do.

ARE THEY WILLING TO CHANGE?

There is nothing wrong with forgiving and forgetting if the soulmate in the wrong is remorseful and willing to change their behavior. If a soulmate is willing to put in the time, energy and effort to be forgiven, there’s no reason not to forgive them. However, if the soulmate keeps repeating bad behavior, how could you possibly forget about it when they just keep reminding you over and over again?

So don’t think soulmates will put up with nonsense over and over again. All it takes is one time to many, and you may convince your soulmate you’ll never change. Once that happens, they give up on you and the chance to have a happy relationship with you. It’s very, very difficult to earn someones trust again. And to make them believe in you. They didn’t want to give up hope, they held on to it for such a long time. But your repeated actions finally convinced them it’s time to give up.

Sometimes soulmates do separate. And some don’t get back together. Before your soulmate relationship gets to a point where you will not be forgiven, and your soulmate will do everything in their power to forget you, make the changes you need to.

1 thought on “Do Soulmates Always Forgive and Forget?”