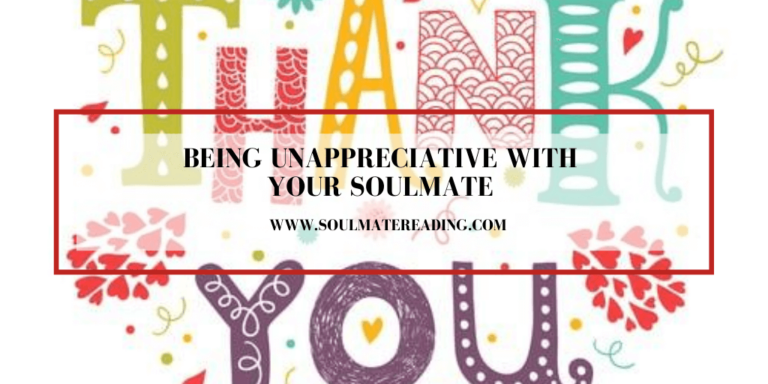 Being unappreciative toward a soulmate happens a lot.

You may not feel appreciated by your partner these days. At times you wonder if you’re making a bigger deal out of it than you should. You look for excuses as to why they may be acting unappreciative.

A list of excuses come to mind. You remind yourself how busy and stressed your soulmate is at work. Your soulmate told you how frustrated they are with their family drama. You arrive at the conclusion that you should cut them some slack.

You’re being too sensitive and things will get better once their work and family situations clear up. Now that might be correct, and things do get better. On the other hand, you may just have an unappreciative soulmate.

SIGNS OF AN UNAPPRECIATIVE SOULMATE

1. They don’t ask about you

The first sign your soulmate is unappreciative is if they don’t ask about what’s going on in your life. They have no problem telling you what’s going on in theirs. The minute they walk through the door they bombard you with their daily drama. Yet they never seem interested enough to ask what’s going on with you.

They expect you to wait on them and get things done for them. No thought is given to how it may be inconvenient for you.  Your soulmate takes for granted that you have the time to do things for them. But they don’t spend a single minute asking about what may be important to you or going on with you. Often this can lead to them flat-out ignoring you completely.

Another sign they don’t appreciate you is they rarely, if ever, say thank you. And, if they do once in a while, it seems like an afterthought. They’re always asking for favors, and pretty much don’t let you say no. When you do say no, they either get mad or complain how it’s going to be a hassle if they do it themselves. But it’s not a hassle for you to it, right?

They constantly ask you for favors and expect you to do them. However, when you ask them to do something for you, they always say they can’t. They go into great detail telling you how much trouble it will be for them. There might be a slim chance they will do it and they will expect a reward big time. They never reward you for what you do by the way. They may tell you thanks here and there. In actuality, they really don’t show they’re thankful at all.

3. Making decisions for both of you

Your soulmate doesn’t consider your feelings when they do things or make decisions that affect both of you. This is another sign you’re under appreciated. They are thinking and behaving selfishly. So long as they’re happy with their decision then you too should be happy. They think only of themselves, not how their decisions affect you.

4. Social life revolves around them

Does your social life revolve around what they want to do? Maybe you don’t have a social life because they never want to do anything. If this is the case, they’re being unappreciative. They should be grateful you’re willing to go with them to action movies or monster truck rallies.

If your soulmate constantly makes then breaks plans with you they’re inconsiderate. And especially so if they act like it’s no big deal. Nine times out of then they use the same old worn out excuses. When plans with you are always the lowest priority, they don’t appreciate your worth and your time. When your soulmate makes plans without consulting you, or makes them only for themselves, they’re showing you your input isn’t needed.

These are 5 signs that your soulmate is unappreciative of you. Perhaps you’ve been doing too much and they take it all for granted. The time has come for them to wake up from their self-centered behavior and realize you’re both supposed to put forth and effort, and are both equal partners in this relationship.

3 thoughts on “Being Unappreciative With Your Soulmate – Top 5 Signs”