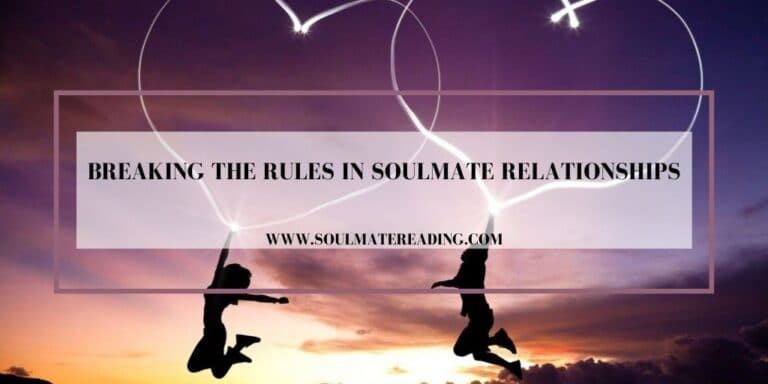 When a soulmate is breaking the rules, expect all hell to break loose. When one or both partners are breaking the rules they’re going against their soul contract. They’re ignoring and avoiding the very purpose of their union on earth.

Instead of learning, growing and evolving, they’re bringing out the worst in one another. So what had the opportunity to be a long-term healthy and happy relationship, has now become toxic and full of drama.

Rules are not meant to be broken in soulmate relationships.

Both partners are to honor their connection and each other. They are to rise to the challenges set before them. The time has come to address the issues within themselves they’ve ignored.

Soulmates must take steps forward on their spiritual path and not go backwards. Prior to their meeting both may have been in bad relationships and picked up bad habits of acting and reacting to conflict. It’s up to each of them to release that baggage and find a healthier way of dealing with life and relationship problems.

WHO IS BREAKING THE RULES?

When one soulmate breaks the rules, it’s on them. The responsibility is theirs, and they need to own up to it. They may be stubborn, but that’s not an excuse. Their lesson may be to become less stubborn. It’s up to the other soulmate to stay strong by enforcing boundaries. If they let them get away with with with no ramifications, it’s on both of them.

You’re both responsible for breaking the rules.

It’s kind of sacrilegious to see how some couples in spiritual relationships act as if they’re possessed by demons. The level of acting out and bad behavior is off the charts. They are not acting spiritual in any way shape or form. Yet they cling to their spiritual connection.

If both partners are not connected to their own spirituality, the connection to one another is meaningless. Many of these same people think they can act like that and the universe will keep them together. Wrong! The universe is not going to support behavior like that. Nor will they assist in helping a soulmate couple continue to be disrespectful to the gift the universe has given them.

Your soulmate could be breaking the rules by cheating on you or denying your connection. Don’t let their rule breaking cause you to lower your standards. We understand you want to fight for your relationship. And there’s absolutely nothing wrong with that. You just have to make sure you’re fighting the right fight.

Stooping to lower level behavior is not fighting the right fight. Keep yourself elevated. A soulmate learns from the consequences you dish out every time they break the rules. Please don’t think having in depth conversations about how they hurt you is going to be enough. Stop hiding behind your fear and get with the program.

Your soulmate is supposed to learn lessons that make them a better person. So are you. Also, don’t focus all your anger on the person they cheated with. Your anger should be placed with the person that allowed this to happen. This is the one who hurt you. That person is your soulmate. Hold them accountable for it.

You’re not supposed to be teaching them this behavior is okay. You have to learn to stand up for what is right, not accept what is wrong because you’re afraid. Don’t break the rules along with your soulmate. There are some rules that are pretty common for all couples. But each couple has a few unique ones of their own. Honor each other by not breaking those rule, and expecting or dishing out punishment depending on if you are on the giving or receiving end.

6 thoughts on “Breaking the Rules in Soulmate Relationships”