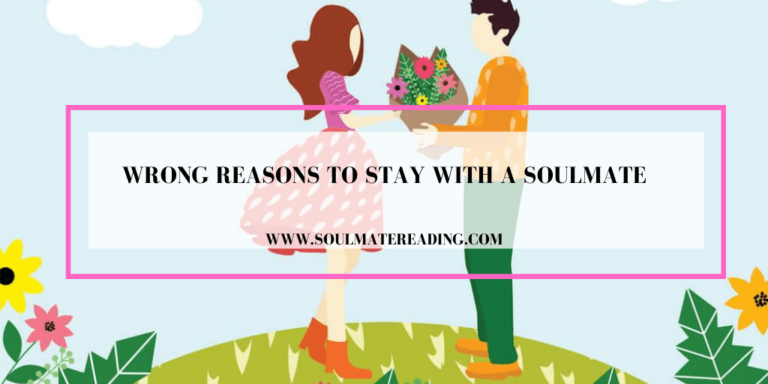 There are many wrong reasons people stay with a soulmate.

Soulmate connections give people the idea they must stay together at all costs. People use the connection as a reason to allow bad behavior and mistreatment in relationships.

We understand how difficult it is to let a soulmate go. But sometimes it’s even harder to stay with them. Many feel they are powerless because they focus on all the wrong reasons to stay with a soulmate.

ARE YOU STAYING FOR THE WRONG REASONS?

In other articles we mention there are times when soulmates separate. There are many reasons why soulmates can’t stay together. There may be a job relocation, a health crisis and many other things that can end the relationship.

Sometimes it’s in the best interest of the couple to separate. Unfortunately, some lessons must be learned while you’re apart. But very often, when those lessons are learned the couple reunites.

Many people find many excuses to stay. This happens because you’re unable to see the big picture. When you’re emotionally involved in a situation, it’s more difficult to see things from a logical perspective.

If you have to remove yourself from your soulmate for a while, it may be for the best. You’re hoping for a long-term relationship with your soulmate. But shouldn’t you hope for a change first? Why continue in this relationship long-term if they’re only going to make your life a living hell?

Something is wrong and you need to take action to fix it. Your soulmate isn’t going to do it. They have no fear of you leaving so sometimes that’s exactly what you have to do.

LEAVE IF YOU’RE BEING MISTREATED

Staying with a soulmate because you believe your connection condemns you to mistreatment, is another wrong reason to stay in the relationship. Your soulmate shouldn’t have the freedom to do as they please at your expense just because they’re your soulmate.

Sometimes leaving your soulmate alone to think about their behavior is like hitting a reset button. Giving them a time out may help to dissipate some of the bad energy between you. Just because you leave doesn’t mean you’re leaving permanently. It just means you need a breather from all the chaos.

This breather gives them some time to think about their actions. It also gives you some time to let go of your emotions and look at the situation from a clearer perspective. It will show your soulmate you have the strength needed to give them consequences to their actions. When they learn this, there is a good chance their behavior will change for the better.

Another wrong reason to stay with a soulmate is the fear of losing them forever.

Perhaps your soulmate is testing you to see what they can get away with. The more you let them get away with, the more dysfunction they bring to the table. Sometimes being brave and walking away is all it takes to show them they’ve crossed a dangerous line. This allows them to know and respect your boundaries instead of walking all over them.

One of the many wrong reasons to stay with a soulmate is that you’d rather have them in your life than not. While that sounds good on paper it depends on the situation. Of course we all need to put up with some bad behavior now and again. But if your soulmate relationship is toxic, your reasoning it wrong.

It’s best for both of you to take some time apart. Take time to let go of the dysfunctional horror show of a relationship you’ve created. This allows you to start over and build a new one.

Instead of trying to repair a broken down shack, knock it down and rebuild a castle. Build it upon a stronger foundation. It will be less work than fixing the shack. Your new castle will be more stable once it’s built. This goes for any relationship really; sometimes it is best to begin anew.

3 thoughts on “Wrong Reasons to Stay with a Soulmate”