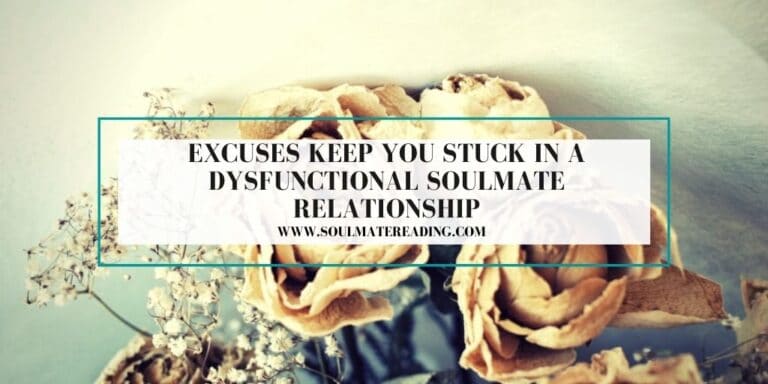 Making excuses for your soulmate will keep you stuck in a dysfunctional soulmate relationship.

We hear many excuses from people who believe they’re in a soulmate relationship. They either use them to justify their own behavior or their soulmate’s.

Either way, all they’re doing is making the relationship worse by not addressing the damage.

There are some people who aren’t in a soulmate relationship, yet swear they are. They insist they’re powerless to leave because of the connection with their alleged soulmate.

These people are just looking for a label to justify their toxic relationship. There is nothing spiritual about this kind of “union”.

Another soulmate excuse is when someone allows their soulmate, or one who they believe is their soulmate, to mistreat, disrespect and under value them. They think the connection is special, so they excuse their behavior and words.

They wouldn’t allow other romantic partners to treat them so horribly. But because they believe this person is their soulmate, they permit this mistreatment. This ensures the bad behavior only gets worse and the relationship more problematic.

The third type of excuse is the one people give for their own actions and words, because they feel they should be excused. After all, it’s only because of the soulmate relationship, and the challenges it brings, that they do and say these things.

They feel they have carte blanche when it comes to their soulmate, and all forms of reason, logic and karma goes right out the window.

THE UNIVERSE DOESN’T WANT YOU TO BE UNHAPPY

You shouldn’t give them a pass for coming in and out of your life when they feel like it. Also, you shouldn’t put your life on hold if they won’t end another relationship to be with you.

Do you really think the Universe put the two of you together so it could be like this? Does the Universe create a spiritual union only so one can be treated like garbage?

You can’t use the soulmate excuse to continue tolerating negative and abusive treatment. That’s not what a soulmate journey is about.

It’s for both of you to learn, grow and evolve into better people and better romantic partners. It’s not so you can suffer abuse. If this is really is a dysfunctional soulmate relationship, it’s up to you both to fix it.

You need to discover your role in this relationship. Allow them to do their part and don’t excuse them from doing it.

Many dysfunctional relationships have their own connection as well. This can actually feel like a soulmate connection. The co-dependency of a relationship can make is appear to be a spiritual thing. But it’s really coming from the wrong place.

It has nothing to do with spirituality at all. People want to “pretty it up” rather than look at how ugly it really is. This is what we call a false soulmate.

People who are being manipulated lose their self-esteem. Those who suffer abuse can sometimes feel something is wrong. Their romantic partner has power over them but it has zero to do with a soulmate connection.

They want to think it’s a soulmate connection rather than face the reality they’re in a dead-end relationship that will never work. No matter how hard they try.

Your soulmate should bring out the best in you.

Making excuses for your soulmate, by either acting out or allowing them to act out, will not bring out the best in each other. Clearly it will bring out the worst.