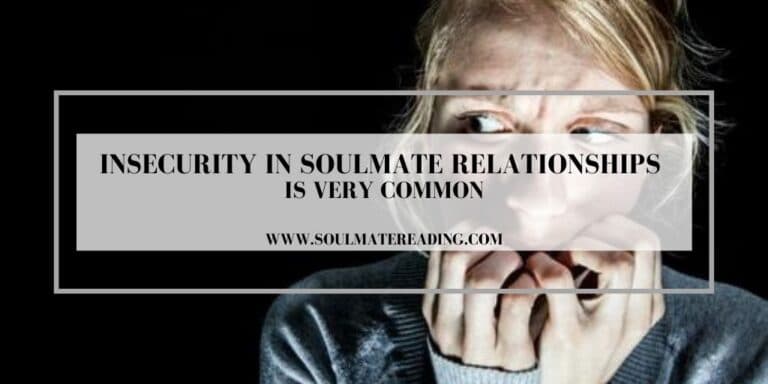 Insecurity in soulmate relationships tends to show up at one time or another.

A soulmate connection is so strong and unlike anything ever experienced before. There is no other life experience to draw upon.

Many people tell us they believe in it and feel it. But are insecure their soulmate doesn’t feel the connection. How does that make any sense?

If you truly are soulmates, then you both have the connection. It can’t be only one of you. They also question if they’re really soulmates if either one of them suffers from insecurity issues. Again, not true. It’s often because of the strong feelings, and pull of a soulmate connection, that causes insecurity to manifest.

So how can soulmates tame their insecurity? Too many people do just the opposite. They engage in behaviors that make their insecurities grow. For instance, let’s say your soulmate leaves their phone unattended while they go to the bathroom. You’ve been getting a little insecure wondering if he’s texting or talking to any others. So you check their phone on the sly while they are out of the room. You find nothing.

What you should do at that point is realize you have nothing to worry about. You should feel bad about having done that. And the insecurity issue should be put to rest. Many people do the opposite. They keep checking their soulmate’s phone every chance they get believing they will eventually catch them in the act.

This exercise is only feeding your insecurity instead of getting it under control. If you keep playing detective, you will remain insecure. This could eventually become an obsession.

IT’S JUST TOO GOOD TO BE TRUE!

It’s common for many soulmates to feel their relationship is too good to be true. Everything seems so perfect and so right. But then insecurity sparks, and begins to take root, telling them there’s no way this can possibly be real. It can’t stay this great, something has to go south. And so they wait for the proverbial shoe to drop and may even go in search of that shoe!

Instead of letting time prove them wrong, they want to prove themselves right. Even at the risk of ruining the relationship. Many soulmates end their relationships because they’re so insecure! They fear it’s going to end, so rather waiting for the imaginary ending, they end it themselves. They didn’t even give it a chance! So they decide to sabotage it, or end it, for a nonsensical reason. The truth is, they let their insecurities get the better of them.

Insecurity can also be contagious when it comes to soulmate relationships. Once one becomes insecure, quite often the other one gets insecure too. If you, or your soulmate, focus too much on your insecurities it could destroy the relationship.

It’s best if insecurity issues are dealt with honestly and openly. This way you can tackle the issues together, rather than letting it tear them apart.

5 thoughts on “Insecurity in Soulmate Relationships is Very Common”