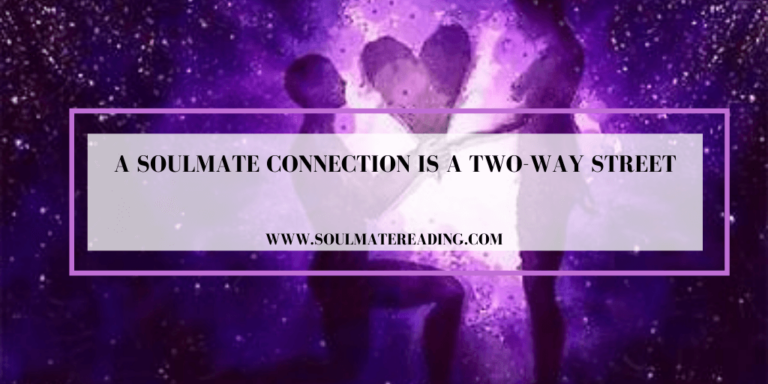 A soulmate connection is a two way street. Both soulmates connect to each other.

Many people are looking for a soulmate connection and many actually believe they’re in a soulmate relationship. This is all well and good, but what if the romantic partner doesn’t feel the same way?

Is it really a soulmate connection if they don’t reciprocate feelings? The answer is no. Both partners have to both experience the connection in order to be true soulmates.

BOTH MUST FEEL THE SOULMATE CONNECTION

In order for a soulmate connection to work both parties must honor it. Someone who’s in a relationship that’s only one-sided feels like they’re dangling with nothing to plug into. If you who have this experience you know how it feels.

In a true soulmate connection, both parties at some point acknowledge it to one another. It may be in the beginning of the relationship or something that develops further along. But we must realize that not every person we feel a connection to will feel one to us. If it is one-sided, it’s something totally different. It could be a crush, an attraction or even an obsession.

The Universe causes soulmates to meet at some point in their lifetimes. What they don’t take control over is what each member does with the connection. It’s ultimately up to each person to do something with it. So divine intervention only creates the initial meeting.

If one isn’t willing to accept it, there’s not much you can do. It is part of their spiritual journey, and you can’t do it for them. They have to be willing to acknowledge the connection and for some it takes time.

1-They don’t believe they’re your soulmates. Just because you believe it doesn’t guarantee they do. Nor does it mean the two of you are actually soulmates.

2-The person you believe you have a connection with may be aware of it. They’re not ready emotionally, spiritually or physically to take on the responsibility of such a deep connection. It may be too overwhelming for them. Or they may fear the loss of control over their emotions by allowing someone to connect to them so intimately (and we don’t mean sexual).

3-They’ve previously been in a soulmate connection but were emotionally damaged by it. So now they have walls up because they don’t want to go through that kind of emotional upheaval again at this moment in their lives.

4-They have a soul connection to someone else, even though you think they’re your soulmate. We have seen this happen on several occasions, where after a soulmate break-up, one is waiting for the other to return. Meanwhile, the other party moves on and forms a soulmate connection with a new soulmate partner.

We see this in soulmate couples where the one who screws things up comes to regret it. Their previous soulmate moves on to someone new and now wants nothing to do with them anymore. And they won’t let go of the past. This person is more than likely not your soulmate because the universe will not give them a new one after their last soulmate disaster.

Being in a one-sided soulmate connection is a very difficult place to be.

The union must be a two-way street or the relationship will never work.

If the one you feel a deep connection with is denying it, they may just be scared. If they ran away and cut you out of their life they didn’t cut the connection, it still exists. As long as you did not deserve to be cut out of their life, chances are they will return.

We also invite you to read our article Red Flags They’re Not Your Soulmate.

11 thoughts on “A Soulmate Connection is a Two-way Street”