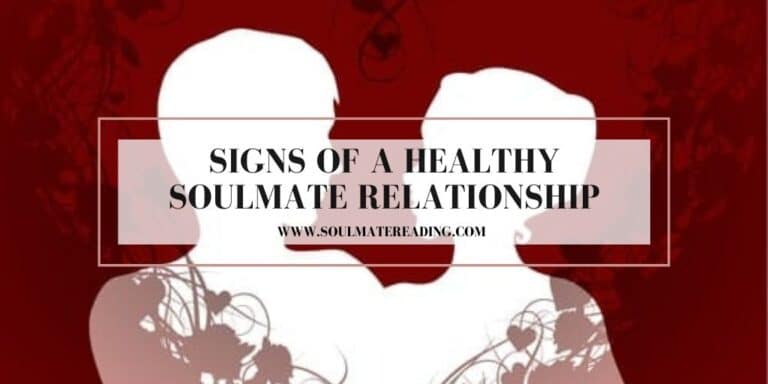 What are the signs of a healthy soulmate relationship?

Since they recognize what changes need to be made, and are working on them, they think their relationship is on the mend. What they don’t seem to understand is that until those changes are made, they don’t have a healthy relationship. And that is a real problem.

1. Bring  out the best in each other

In a healthy soulmate relationship there’s both quality time spent together and time spent apart, without conflict. The quality of time you spend together is just as important as how you spend your time apart.

Time apart can be very good for a relationship. It helps maintain some independence and can strengthen the trust between the couple. Quality time together does not just center around the wants and desires of only one of you.

You both are pursuing similar life goals. One can’t be pursue a goal of traveling around the world while your soulmate’s goal is to settle down in one place and start a family.

In healthy soulmate relationships, both of you must put forth the time, energy and effort to keep the relationship going. It’s not the sole responsibility of only one of you. If it is, your relationship is unhealthy.

Transparency is a must in a healthy soulmate relationship. No sneaking around, no hidden agendas and no major secrets. You can each speak your mind without worry of repercussions.

A healthy soulmate relationship is a realistic one. You accept one another fully, the good and the bad. Although you may not like every single aspect of your soulmate, you accept that it’s who they are. You don’t fantasize about who they could be, you deal with who they actually are.

Couples in healthy soulmate relationships can speak freely. They know how to communicate without it always being a huge argument. They say what’s on their mind, and express what they’re feeling, instead of keeping it to themselves. Their communication is consistent and not sporadic.

People in healthy relationships also feel heard when they talk. Although the couple may not agree on everything they’re at least open to listening to what the other has to say with an open mind. They aren’t focused on changing each other’s mind because one’s opinion is right and the other’s is wrong. They are both open to compromise, not just one of them.

Healthy soulmate relationships don’t just create themselves. They’re created by soulmates who are willing to work together to ensure the relationship thrives and survives. Make sure you’re doing the right things in your relationship and not the wrong things to ensure is success.

7 thoughts on “Signs of a Healthy Soulmate Relationship”