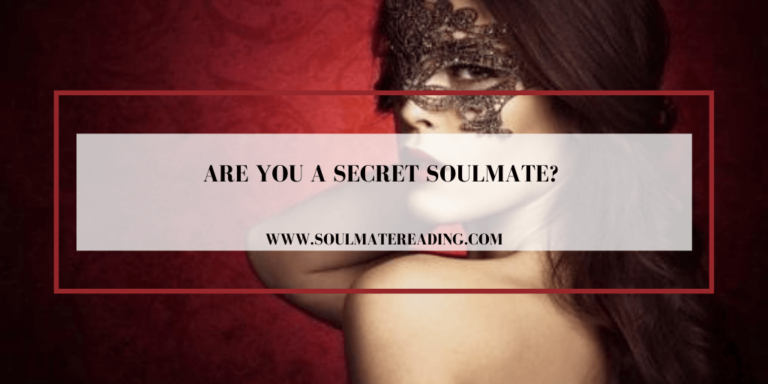 Are you a secret soulmate?

Is your soulmate keeping your relationship a secret from their friends, family, and co- workers? Are you tired of being a part of their life but aren’t allowed to be part of theirs?

No one likes to be kept on the back burner. Being a secret soulmate can be hard on your self esteem. Why would they be hiding your relationship from everyone else? Are they embarrassed because of you? Or, could it be because they’re already in a relationship and have to keep yours a secret? Could they be just using you as a booty call? Are they even really a soulmate if they won’t make you a part of their life?

KEEPING THE SECRET SOULMATE IN HIDING

When your soulmate keeps you a secret, you feel left out. You don’t go with your soulmate to their work functions. You don’t get to join them with their family at holidays, special occasions and significant events. When their friends invite them anywhere, they never take you along.

So you begin to wonder exactly how important you really are to your soulmate. How can they say they love you so much, and want you in their life, when so much of their life is off-limits to you? They say things will change, but as time goes by, you’re beginning to lose hope. You’ve heard the excuses and you’re understanding and feel compassion for them. But lately, or for a long time now, you’re beginning to get mad. And that’s leading to frustration.

How can your soulmate relationship grow if your existence is kept in the dark? It really can’t. You can’t trust them if everyone else thinks they’re single.

Your soulmate has been lying to everyone in their lives by denying their involvement with you. If and when you actually meet these people, you’re going to have to start your relationship with them with lies. Not exactly a good foundation to build a relationship on, is it?

It’s even worse when they’re in another relationship and have to keep you on the down low. You see social media postings with them and someone else. This is nauseating. They seem so happy and perfect as a couple. Their friends and family all seem to know their significant other. Yet they have no idea you even exist.

Seeing things like that make it hard to believe the things they say to you. You hear from them how bad their relationship is, but that’s not what it looks like on social media. They tell you how much they love you and don’t love their significant other. Again, social media seems to show otherwise.

Why are they still with them and you’re their dirty little secret? Your friends are all telling you that you are insane to be tolerating this. They tell you that you deserve better. And, they are right, you do. Hate to tell you but you may have to deliver an ultimatum to your soulmate to get them to do the right thing.

And what about your soulmate’s excuses? What’s a good excuse for making you their secret soulmate? They always seem to have one. But should you keep excusing them from their responsibility to do right by you? No, you shouldn’t. You gave them a reasonable amount of time to do what they need to do. Enough already with the excuses. You don’t need to hear any more of them. What you need is action, and you need it right now.

Obviously the relationship they’re in isn’t working for them. They don’t want to end their relationship with you. Well, they cannot have it both ways. Once you both are sure your feelings for each other, and want a life together, all excuses are no longer excusable. So they will lose money and have to get their own place. Big deal. Happens all the time. Are they really going to say money is more important than being with you?

3 thoughts on “Are You a Secret Soulmate?”