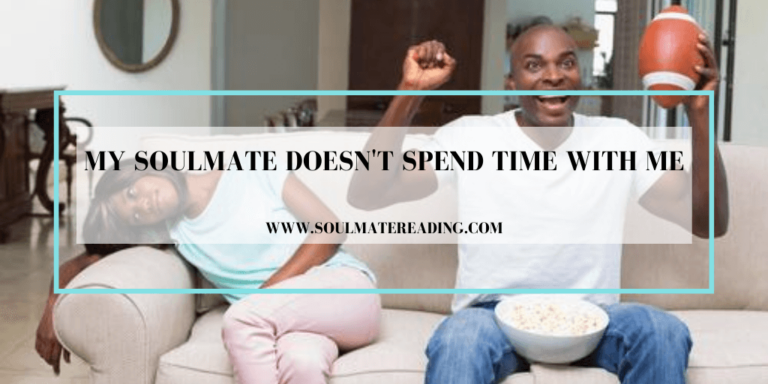 What do you do when your soulmate doesn’t spend time with you? What are you to think when there’s an ever-growing distance between you and your soulmate? Sometimes during the early period of a soulmate relationship, one or both soulmates may need some alone time. At the beginning of a soulmate relationship they quickly become glued at the hip. And they want to spend every waking moment of the day with each other.

DID THEY SPEND TIME A LOT AT THE BEGINNING?

At a certain point they both have to catch up on their own lives. And all the things that fell to the wayside during that period of time. However, the intensity of a soulmate relationship can make one or both parties need a bit of a breather. After the intense connection of their first few weeks, they have to catch their breath and get their head together.

They felt swept away, and may have gone willingly and joyfully, by this new connection. But now they must come up for air. It isn’t necessarily a bad thing. They just need a way to make this new relationship fit into their lives. But not completely take over. Because when it did take over, it was pretty awesome. But it was scary as hell.

When a soulmate tries to make this new relationship fit into their lives, the transition may not always go smoothly. Some find this connection to be a bit too overpowering and feel a bit of distance may help. Or they may freak out big time and decide they need to deny the whole thing to themselves and to you.

In a lot of cases, even when a soulmate won’t spend time with you because they are in denial, eventually they will. Don’t push them too hard and don’t beg. This is their issue to work out and you can’t do it for them. Try and be patient and not worry too much. We know this is easier said then done. You don’t want to give them an excuse to stay away even longer.

BUT NOW WE SPEND NO TIME TOGETHER

If your soulmate doesn’t spend time with you after considerable time together, it could be that they’re spoiled and taking you for granted. They may feel they have all the time in the world to spend with you later. So they make other things a priority. They may also have gotten a lot of support from you so they don’t worry how you’re spending your time apart from them.

Soulmates, like other couples want to be sympathetic, supporting and understanding. But too much understanding can actually lead to where they don’t spend as much time with you. They’re busy with work, all the things they have to handle and everything else. They figure you’ll understand and cherish the time you do spend together. It isn’t that they don’t love you or that your soulmate connection has changed. They just feel very secure in the relationship and your feelings towards them.

They don’t see things from your perspective and feel the connection is enough to keep you going. Soulmates, like every couple, can drift apart and have a hard time growing if they don’t spend enough time together. If you’re having this problem with your soulmate, address it with them. If they have excuses that you accept, talk about how these excuses need to be temporary. Because there can’t always be this little time spent together for the relationship to thrive and grow.

1 thought on “My Soulmate Doesn’t Spend Time with Me”