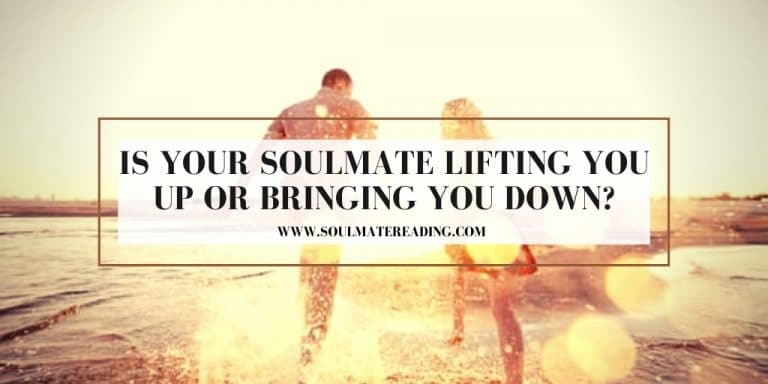 ThIs your soulmate lifting you up? Soulmates should be lifting each other up, not bringing one another down.

The problem, when it comes to soul connections, it’s either one extreme or the other. A soulmate connection forms so each could go higher together than they would apart. They should bring out the best in one another and support each other to achieve all they can in this lifetime.

THERE ARE TWO PATHS

Although soulmates should be lifting each other up, they can easily crash down to depths one never thought they would reach. In almost all cases, soulmate relationships take one of two paths.

Path one is where the soulmates accept and respect their connection. The couple is thankful and appreciative of it. They make changes and grow to better themselves. And the reward is a stronger, more evolved relationship. This occurs when soulmates are lifting each other up.

Path two, which is the most common path, is filled with drama. A soulmate can take their connection and use it as an excuse to fail the lessons they’re to learn. So the lessons repeat, and the couple continues to fail. All the while they’re in a dysfunctional relationship that just keeps getting worse.

Soulmate relationships are the most significant relationships of our lives. They impact everything. A soulmate couple should treat their spiritual connection and its significance with respect and honor. Soulmates should be lifting each other up. If it’s not, there will be no reward.

If you find yourself in a soulmate relationship that has taken the wrong path, you should be able to see quite clearly the negative effect it has on other areas of your life. But if you’re on the right path, even if your soulmate has not followed you, things in your life will continue to improve. If your soulmate isn’t following the right path with you, their entire lives will suffer because of it. It’s one of the main reasons they ultimately begin following you at some point.

Sometimes you have to let your soulmate take a different path. As long as you’re doing the right thing, things will go well for you. Trust and believe the same will not be said for your soulmate. Don’t think you will be the miserable one while they go off and live this happy wonderful life, regardless of their social media propaganda. (And what they tell their friends and family.) The universe does not reward bad behavior.

When someone is ungrateful, or acts horribly toward the soulmate gift they have been given, they’re not rewarded for that. Why should they be? Karma may not come right away. You may not get to see the karma delivered to that person. But it will be delivered.

Karma is also the reason the two of you, doing the wrong things, have a dysfunctional relationship. They are misbehaving and you are enabling it. You are not going to be rewarded with a great relationship. Instead, due to your choices, the relationship suffers. Soulmates don’t have to go through drama and separation. It’s not a part of your contract that something like this has to happen. Those only occur due to the free will of the partners.

So, the choice is up to the two of you. What you make of the relationship and what you bring to it will determine its path. How happier you will both be depends on making wiser choices and staying spiritually centered.

5 thoughts on “Is Your Soulmate Lifting You Up or Bringing You Down?”