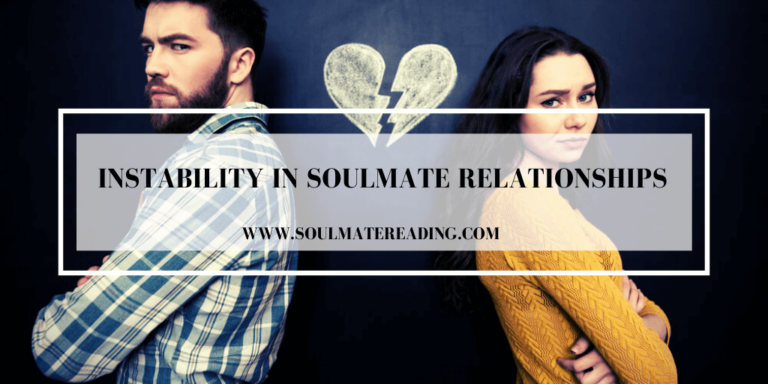 Instability in soulmate relationships is very common. And many soulmate couples suffer from it. If not addressed, instability can lead to dysfunctional dynamics within the relationship. When a relationship is very unstable, it breeds insecurity, unhealthy behavior patterns and tons of drama.

If you’re in an unstable soulmate relationship, there is no happiness. You’re sticking around hoping it gets better. The thing is, if you don’t do something about it, and soon, it’s only going to get worse. Soulmate relationships need work. And the connection alone won’t keep the relationship running smoothly.

If your house has a roof leak, and you don’t fix it, at some point the ceilings in the house get water damage and eventually fall down. If you still don’t fix it, the walls and floors can be destroyed. Down the road, if the damage is still not contained and fixed, you can get toxic mold. And then your house will be condemned. What started out as one problem with your house created more. And this destroyed the house and you can’t live there.

At some point this unstable relationship will just implode. So if your soulmate relationship is a rocky one, be the bigger, smarter person and keep a level head. Someone has to take the lead. If you aren’t the one causing most of the instability, then that person is you. The one doing the damage shouldn’t be the one running the show.

The one causing the instability usually becomes the one in control. The longer they’re in control, the worse it gets. They usually get their spiritual partner to follow along with them, which really screws things up.

Instead of drawing a line in the sand, the other partner enables their soulmate to keep doing and saying things that make the relationship unstable. They make excuses to themselves, and to others, instead of doing what’s right. They allow the bad behavior to continue. And they hang in there with some weird, and wrong, idea that some day, out of the blue, things will magically change.

Instead of waiting around for some mystical force to do something, they should create changes, but they don’t. They’re afraid to lose their soulmate, so they’re afraid to take a stand. That fear gives them the brilliant idea that if they kept a bad relationship going it will get better. Wrong. Eventually the relationship just gets to the point where it is just a toxic mess.

ACTIONS YOU CAN TAKE TO GAIN STABILITY

So what are the right things to do when you’re suffering from instability in soulmate relationships? First thing, address what the main cause of the problem is. Don’t focus on the problems the main problem caused. Go to the source. Without addressing the true source, you’ll never really solve the problem. That’s like putting a bandaid on a gunshot wound.

Let’s say your soulmate keeps breaking up with you all the time. This will cause you to walk on eggshells and worry each time that maybe they won’t come back. You’re afraid to make waves, or point out when your soulmate is behaving badly, because you think they will break up with you.

This has most likely made you more and more insecure. And your dignity takes a hit each time you put up with it. Now every time your soulmate does something wrong, they know they can get away with it. Is it any wonder why they keep behaving badly?

In this situation you have to change what you do when your soulmate is in the wrong.

Change has to start somewhere.

And your soulmate more than likely has zero desire to make a change. You have to overcome your fear and focus on the reality of your relationship. It’s not going to get better without hard work. Something about YOUR words and actions makes them think they can do or say whatever they want. And that they can get away with it. Unless you shake things up you won’t change their attitude about breaking up with you or treating you badly.