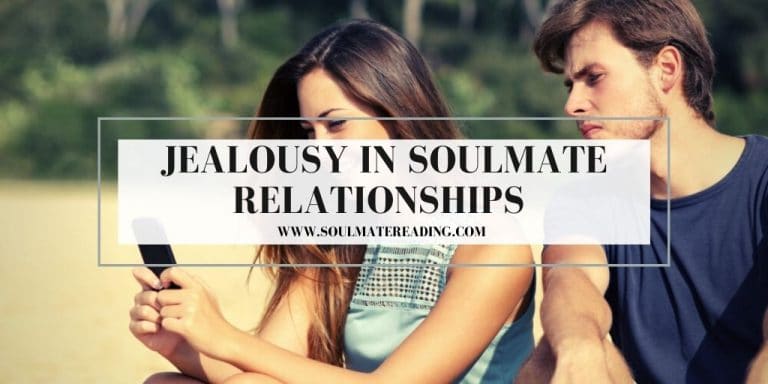 Jealousy between soulmates can be very detrimental for their relationship.

It can present itself in many ways for many soulmate couples. Soulmates often meet for the first time when they’re not single. Because of this, many soulmates are jealous of their partner’s significant other. They see them as the main obstacle to being in union with their soulmate.

It irritates them that this person is standing in the way of their happiness. Sometimes it takes a long time for a soulmate to end their current relationship. This scenario is a breeding ground for jealousy. Every moment they’re not with their soulmate they are jealous because someone else is. This includes holidays, birthdays, and special occasions.

Sometimes soulmates can have an on/off relationship. It’s hard to understand why someone speaks so negatively about their ex, yet keep returning to them.

Many people in this situation are jealous of the ex. They believe the ex may have a hold or power over their soulmate. They may also think their soulmate still loves their ex, and not them. Otherwise, why would they keep returning to the ex?

The answer to that is so simple. It has nothing to do with the ex. Soulmates often use their ex to create an on/off situation on purpose. They do this so their soulmate relationship cannot grow and move to the next level. They may fear commitment, getting hurt or the connection itself.

A spiritual connection often comes with drama, unfortunately. But the challenges are to heal what triggers lower level emotions and behaviors. In order for the couple to be aware of their issues, they must rise to the surface. So, the universe allows those triggers to be tripped.

Sadly, most couples don’t react to this properly. They excuse and enable one another. This is what creates a toxic, dysfunctional relationship between them. It also makes feelings of jealousy, insecurity and hopelessness become constant presences in their relationship. This can, in turn, very often lead to stalking a soulmate.

Is it any wonder the relationship is a disaster?

It’s actually very shocking how often this takes place, and how often it works. Acting with jealousy gives a huge ego boost to many soulmates. Never reward bad behavior, or expect to see it time and time again.

Soulmates are supposed to bring out the best in one another. This gives them both the opportunity to thrive and be better people. Lower level emotions, such as jealousy, will only bring out the worst in each other, and in the relationship.

2 thoughts on “Jealousy in Soulmate Relationships”