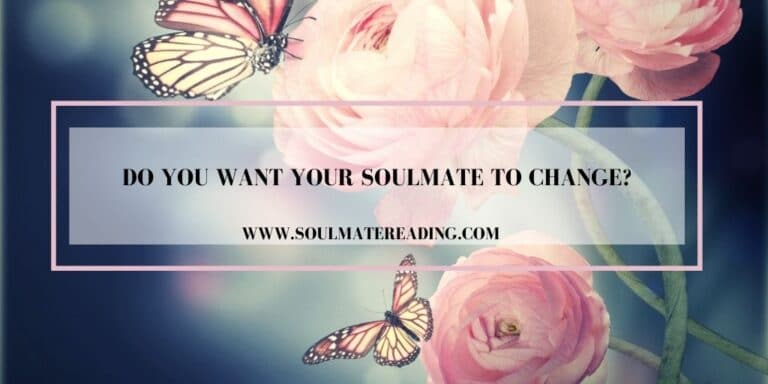 Do you want your soulmate to change? Waiting for change that doesn’t happen is very frustrating and exhausting. You believe if they make these changes the relationship will be better. The problem is, a lot of time passes, yet everything is the still the same.

So you continue to wait and things just get worse. People call us from all over the world wanting to know when their soulmate will change into the person they want them to be. But instead of waiting for them to change, why don’t you change yourself instead?

HOW HAVE YOU CHANGED?

First of all, why are you in a relationship with someone you wish to change? Perhaps they’re no longer the same person they were in the beginning of the relationship. But then again, you probably aren’t either. Their once kind, loving and supportive manner has been replaced.

Now it’s disrespect, mistreatment and criticism. So what has that brought out in you? Were you once a confident, strong, no nonsense kind of person? Are you now riddled with insecurity, fear, and weakness? They may not be who they were at the beginning of your relationship. Chances are, you aren’t either. If you want them to change back, change yourself back first.

When we’re in a soulmate relationship, our soulmate becomes our mirror. This mirror reflects to us some of the things we need to change in our own lives. Rather than expecting a soulmate to change into what we want or expect them to become, our energies would be better expended changing ourselves. Change is difficult. Especially when there are many obstacles to overcome. But hoping someone else will change without any catalyst is realistic.

When we change our soulmate has no other recourse but to change. They have to in order to reflect back to you the changes you make. We’re not suggesting big, grandiose changes. But ones that show a subtle difference in how they expect you to act and behave. For example, if you text your soulmate one hour after a previously unanswered text, stop it. Just don’t do it anymore. Change your behavior. Stop chasing them.

On a larger scale, if you’re always the one to extend the olive branch after an argument to make peace, don’t do it anymore. By changing our own behavior patterns, it will naturally change the behavior patterns of those around us. If you’re the one who pursues, stop pursuing. Instead of being the one who initiates contact, wait for your soulmate to contact you.

Does your soulmate usually go silent for days or weeks after a huge disagreement? Do they then one day pop up out of the blue with no apology or explanation? If so, ignore them. You have the responsibility of changing the situation if it needs to be changed. Change how you react to their bad behavior. The first step needs to come from you.

TAKE YOUR POWER BACK

Do you allow your romantic partner to take you for granted or undervalue you? If so, having any expectation of them changing on their own is unrealistic. If you’re in a soulmate relationship where this same pattern is occurring, the Universe is calling YOU to take your power back. It’s time to stand your ground and demand respect from your partner.

It clearly presents the karma you need to work on in your part of this karmic relationship. You’re having this soulmate relationship to teach you, so time to get on with it. Do what you need to do. If you don’t the situation will probably remain the same, which will make you unhappier. You might as well learn the lesson now. If you don’t it will still come later on, just in another form and probably with another person.

It’s much easier to start making changes when you first identify them. Waiting and hoping things will change on their own will only delay your happiness. A soulmate fairy isn’t coming to wave her magic wand. The longer it continues, the longer it stays the same. You don’t want to wait and allow this soulmate relationship to turn into a dysfunctional one. So why not fix it now?

We understand you may have fear and anxiety your soulmate may end your relationship. We know that ending the relationship would make you unhappy. But you’re unhappy right now. Without change you won’t find happiness with your soulmate. If you find the courage to change though, you have a greater chance of success. When you honor your soulmate connection, the universe works with you. And so will your soulmate.

BUT CAN MY SOULMATE CHANGE?

So what about your soulmate changing? Do we think they can change? Of course they can! Personal transformation is part of your life lessons and purpose within the soulmate agreement. It’s also theirs. It is just as much their responsibility to grow and evolve. This is the real reason the soulmate relationship is in place. So the good news is that as you change, your soulmate will have the opportunity to change also.

Whatever the situation is that needs changing, you do have the power within you to do it. You just need to identify what needs to change. If your soulmate relationship is making you unhappy, it obviously needs fixing. If it can be fixed, you can play a larger role in mending yourself. You just need to uncover what needs to be changed and subtly start making those changes. Give both you and your soulmate the opportunity to create positive growth while you continue on your spiritual journey.

2 thoughts on “Do You Want Your Soulmate to Change?”