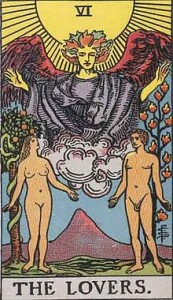 The Lovers represents relationships and choices. When it appears in soulmate tarot card readings you might need to make a decision about a relationship. Although it could also just mean a general life decision needs attention. The Lovers relates to the astrological sign of Gemini, The Twins.

So considering which tarot cards relate to soulmates, The Lovers is our first choice. There is simple symbolism of ‘the twin’ on the cards. The can also indicate yin-yang, where both divine feminine and divine masculine are present. But there is also temptation. See the snake in the tree of knowledge?

The Lovers can also indicate choices, passion, sexuality and a connection. The man, Adam, looks to the woman, Eve. She however is looking at the angel above them. Soulmates meet though divine intervention. The angel is spiritually guiding the couple to come together in soulmate union. And the clouds symbolize the merging of their souls. 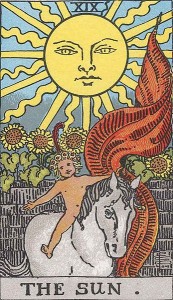 Another major arcana card, The Sun, also reveals a soulmate relationship is present. The Sun tarot card teaches us about positive feelings, expansion and optimism. It  represents happiness, contentment and joy. The Sun is often referred to as the BEST card in the deck. It speaks of positive outcomes to the question you ask. It represents the universe coming together and shows you’re on the right path. You are moving forward into something greater.

The Sun, in all its glory, is shining brightly upon you. It radiates onto everything in your life. All things in your life are good, whole and complete. If it’s surrounded by other positive cards such as the 2 of cups or 4 of wands, it gives extra oomph to that card as a soulmate indicator. Having The Sun present in soulmate tarot card readings provides great optimism for a positive outcome for your soulmate relationship. 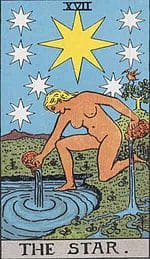 The Star is another card in the major arcana. It reveals your soulmate perceives you as the ideal romantic partner. When we see the presence of The Star in a soulmate tarot card reading their is certainty that spiritual growth is shortly coming into your life. The Star tells us about free flowing love, tranquility and peace of mind.

The naked woman pours water from the jars onto the land and pond. We are reminded of the fluidity of water and how it’s constantly changing. Very much like a soulmate relationship. The two jugs represent the opposite sides of our nature, our shadow self and our true self. This implies a soulmate relationship when we remember soulmates often mirror each other.

The star above her head reminds us of  the fulfillment of our hopes and dreams, much like our expectations for a soulmate relationship. The 8 stars represent all 8 planets, with the exception of Pluto, so we are reminded of the inter-connectedness of the Universe and how the soulmate tradition came into being. The bird in the tree represents the Phoenix rising from the ashes. This is very reminiscent of soulmate relationships. They come around lifetime after lifetime, as there are very strong influences of past lives in soulmate relationships. 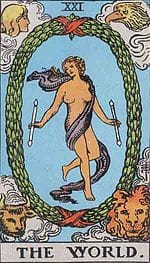 When The World is the last card of the major arcana. The world tells us about the completion of all things. And everything coming together for the good of all. When it appears in soulmate tarot card readings there is also the presence of a soulmate relationship.

The figure of the card is both male and female.  The World requires nothing to complete them. They are whole as they are. They contain both sides of themselves, masculine and feminine, the yin and yang. And that energy is perfectly balanced.

The World is the alchemical union – the spiritual union – the physical with the divine in perfect harmony. It represents success, accomplishment, harmony and union between opposites, male and female. And they merged into one. We refer here to divine feminine and masculine energies, regardless of sexual orientation, of course. When The World is present in soulmate tarot card readings there is a strong indication that marriage is likely. 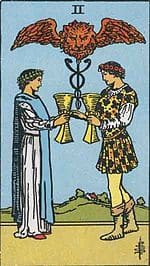 In the minor arcana the Two of Cups teaches us about the soulmate union. The couple stare into each other’s eyes, while they individually hold their cups. Again this symbolizes the fluidity of water and the emotional component of a true love relationship. There is romance, chemistry and sexual attraction between them.

A strong soul connection exists between them, as they look at each other. This is about harmony between two people, a coupling, a true soulmate bonding. These two souls, have traveled together through many lifetimes. This card recognized the reunion of these souls who have come together in this lifetime to finish commitments begun in previous lives. When the Two of Cups is present for soulmate tarot card readings it is a very strong indicator of a soulmate union between two people.

You can also read our article on the Justice Tarot Card.