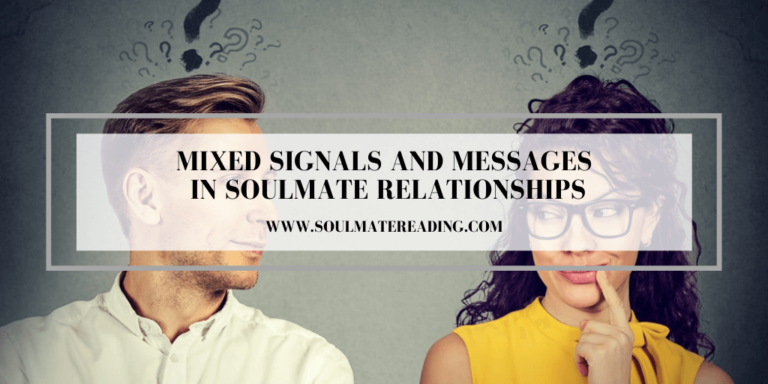 Mixed signals only add to confusion in soulmate connections.

Soulmate relationships are hard enough to navigate as it is. So dealing with mixed signals can make some soulmates feel they’re going off the deep end.

Most of the time a soulmate sending mixed signals is not intentional. They don’t intend to drive their soulmate crazy,  put them on edge or want them to drive off a cliff. All they’re doing is trying to work through their own acceptance of the soul connection.

No one is fully prepared to experience a soulmate connection, regardless of what they think. There is no previous experience to really draw from, or learn in advance, in how to navigate the soulmate journey. Talking to friends or family isn’t really an option. If they’ve never encountered a soulmate union themselves, how can they really understand what you’re going through?

If you already think you’re losing your mind you may be afraid to share what you are going through with others for fear of judgement. Also, when trying to understand your soulmate relationship it’s difficult to properly articulate to someone
else what you’re feeling and thinking.

So one day (or one minute, or one hour, depending on the individual involved) a soulmate may be going with the flow, and sending positive thoughts to their soulmate. They’re expressing their emotions, being very open and discussing the future of the relationship. They reveal to the partner how truly happy they are to be in union together. Then the next day, it’s completely different.

They may seem withdrawn both in their emotions and with their words. Where yesterday they spoke of how they want to spend every waking moment together, now they’re saying they don’t have time to invest in the relationship. Did their feelings change? Does what they want from this connection change? NO.

So when you’re on the receiving end of mixed signals like this, DO NOT PANIC. Don’t let the mixed signals have a domino affect on you. Understand first that feelings don’t change for anyone overnight. So let that go immediately. Second, although it’s tough, keep in mind this is a process your soulmate has to work though. They aren’t doing this to hurt you. But they are doing it because of an internal struggle within them.

It’s hard for some people to see a side of themselves they didn’t know existed. Perhaps they’ve never heard of soulmates before or believe in them. And they have no one to ask for guidance. How do they go from someone who can handle their emotions so well, to someone whose emotions are off the charts and out of control?

THEY’VE BEEN HURT BEFORE

They’re usually very cautious, because they’ve been hurt before. So they need relationships to develop at a slower pace, allowing them to build trust over time. Now they feel they’re head over heels with someone they just met. And that is scary and uncomfortable. So as they go back and forth between thoughts and feelings of “this is great” to “this is the weirdest, scariest thing that has ever happened to me”, of course you’re going to get plenty of mixed signals from them.

You are going through your own acceptance journey so this can really throw you for a loop. Please keep in mind though, your journey of acceptance is yours. But theirs is for them. You can’t carry them along or force acceptance on them. They won’t be able to deny the connection between the two of you forever. Regardless of how many mixed signals they send you, they will reach a point where they give in and give up fighting it. But all soulmates reach a point where they accept the connection between them is real. What they both decide to do about it is another story.

1 thought on “Mixed Signals and Messages in Soulmate Relationships”