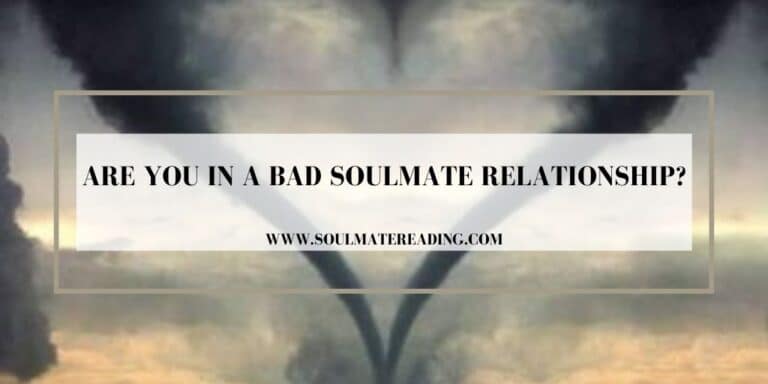 A bad soulmate relationship seems to be more commonplace these days than ever before.

Communication has broken down so badly that some either barely speak or fight all the time. Control issues, insecurity, and disrespect have taken over and the couple are at odds with one another. Things have gotten so bad that the soulmates may have broken up, separated, or even divorced.

The drama is daily, and things are only getting worse as time goes by.

How did such an amazing connection become a bad soulmate relationship? How did something so beautiful at the beginning become to be such a toxic mess?

For some reason there is a myth that all soulmates must go through all of this drama in order to become a stronger couple. This is complete nonsense.

Yes, lessons and tests are a part of the relationship. They will present themselves for the couple to learn as individuals or as a couple. That is where the universe stops.

So many clients write to us asking “Why is the universe doing this to me?” The universe isn’t doing anything to you. You’re either doing to yourself or your soulmate is doing to you. Plain and simple. If you keep blaming the universe, or accepting that bad behavior as part of what you must accept, you haven’t learned anything. It is any wonder why your soulmate relationship is so bad? Not at all.

CONDITIONS OF A BAD SOULMATE RELATIONSHIP

If you can answer yes to any of these questions, you’re in a bad soulmate relationship. It’s only going to get worse unless something drastically different is done. What’s going on between you and your soulmate is no longer working. Change needs to occur and it needs to begin at once.

Many people are shocked at how bad a soulmate relationship can become. They’re surprised to see the level of dysfunctional behavior in a spiritually connected relationship. They thought the relationship would be a breeze going forward. Now it’s more like a massive tornado has hit them right where it hurts most.

Even though a lot of damage has occurred, the relationship can be rebuilt. If done properly, without cutting corners, it will be stronger and better than ever. Too many people want to cut corners or do things the easy way. But with soulmate relationships, this never works.

You didn’t make things better. You both made them worse, which is now harder to fix. If you want your bad soulmate relationship to get better, you need to get realistic. It took a long time to get to this level of insanity. So it’s going to take a long time to create change for the better, make it stick and build a new foundation.

This is not going to take days or weeks. Prepare yourself realistically. Look at your part in the relationship. Did you purposely avoid handling your soulmate when they acted out? Look at what you have been afraid to do.

Most likely, that may be the very thing you need to do. You can’t expect the universe to do this for you. If you want this relationship to go from good to bad then get to work. Otherwise, your bad soulmate relationship will continue to get worse.

3 thoughts on “Are You in a Bad Soulmate Relationship?”