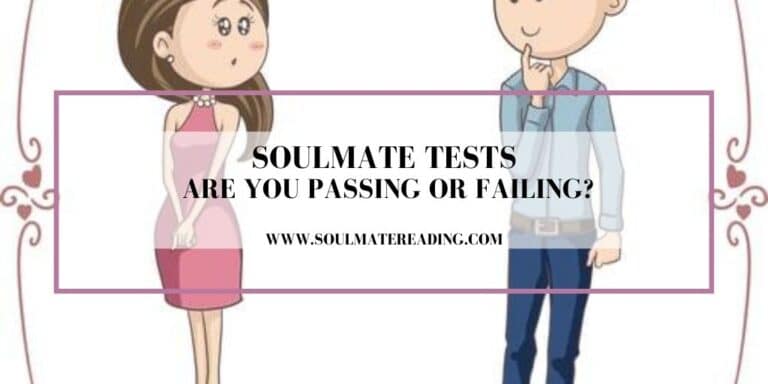 Is your soulmate failing all the soulmate tests the universe is presenting to you both individually and as a couple?

If your soulmate has done any of the above, they’re seriously failing their soulmate tests. The universe doesn’t bring soulmates into our lives for just romance and happy times. The true path of the soulmate connection is to change our perspective on the direction our life path is headed. Soulmates are there to help us see the changes that we need to make in order to be more fulfilled. And to live our best and most authentic lives.

Soulmate relationships always come with a series of soulmate tests. If we keep failing test after test, the lessons will just get harder and harder. If we keep failing our soulmate tests, the Universe can often resort to smashing our heads with a 2X4. Or they could drop the equivalent of a 14-pound bowling ball on our heads, until we get the lesson.

Things will continue to get harder until the two of you start making the right choices. Look at your soulmates behavior. Do you really think the universe is behind them treating you so badly? Of course not.

Now look at your behavior. Do you really think the universe wants you to lose your self respect and dignity by allowing yourself to be treated badly? No again. So before your soulmate relationship hits the breaking point, learn to pass the tests, instead of failing.

Keep in mind you may have tests both individually and as a couple. Whatever test the universe is giving your soulmate, it’s up to them to pass or fail. You can help them, but you can’t take the test for them. That’s cheating. You may be doing things with the best of intentions, but are setting your soulmate up to keep failing the test. Interfering in your soulmate’s lessons will only cause them to be tested again, until they can stand on their own two feet.

For example, the Universe may want your soulmate to stop sabotaging the good things that come into their life. They may have a pattern of behavior in relationships, or other areas of their life, where acting out or being unreasonable sabotages their relationship with you. The Universe put you in this relationship to be a catalyst for change, not to enable them.

Perhaps the Universe, at the same time, wants you to learn to stand up for yourself. If you enable your soulmate by accepting and feeding into their bad behavior, you set them up to keep failing. You will keep failing your test as well, because you’re not standing your ground.

So what might seem to be the right thing to do is actually the wrong thing to do.

You may say “Well, I am not a confrontational person”. And that may be exactly what the universe wants you to change.

Of course, they don’t want to you to become a confrontational banshee. But they want you to confront things head on when needed. This may be a hard test for you to pass. But it was not meant to be easy. Otherwise, you would not be getting this lesson at this point in your life.

You contracted with your soulmate to have this life lesson with them for your own personal growth and development. Their soulmate contract with you was to stop sabotaging their relationships.

The Universe wants you to work on this because it benefits you at some point in the future. If you’re tired of retaking the same tests over and over again, learn your lesson. It should be obvious that what you’re presently doing to keep the peace isn’t working. So isn’t it time to really learn what the Universe is attempting to teach you?

If you want your life, and your soulmate relationship, to get better YOU need to do better. If something isn’t working, stop doing the same thing over and over again to try to fix it. Try something new. As they say, you can’t change anything until you change yourself.

6 thoughts on “Soulmate Tests: Are You Passing or Failing?”