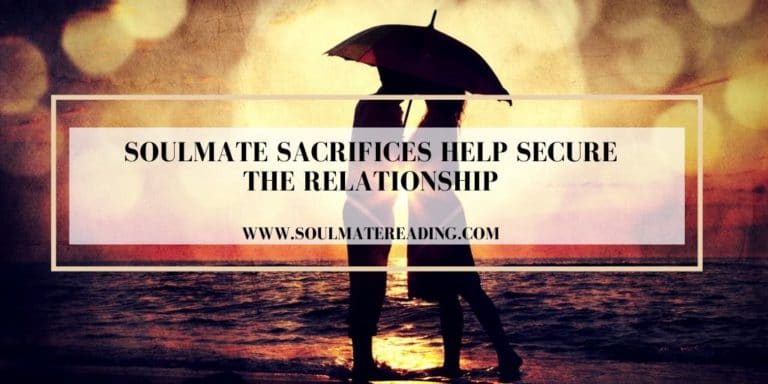 Soulmates must make sacrifices in order to have a healthy, compatible relationship. As individuals, each member of the couple, must sacrifice something for the relationship to go down a positive path.

The reason soulmates come together is so they can let go of what’s no longer serving them or holding them back. The intense connection between them is to give them the strength and support they need to make these sacrifices.

WHAT ARE SOULMATE SACRIFICES?

For instance, someone who has let their family‘s needs or control keep them from relocating for their career, will find themselves facing that situation in one way or another.

Perhaps their soulmate lives in another city, state or country. Their soulmate connection is forcing the issue to the forefront. If they want to pursue their career, and if they want their soulmate relationship to flourish, they’re going to have to relocate. In the past they may have felt selfish or guilty for even thinking of leaving their family behind. Now they realize they’re going to have to sacrifice living close to their family if they really want to pursue their own goals and happiness.

The sacrifice a soulmate must make could also be to change their ways. They may have to let go of their patterns of behavior. Being selfish, or any other qualities that stand in the way of a happy, long-term relationship must be released.

We hate to say it but they may have to sacrifice a loveless marriage. This situation happens a lot between soulmates. It could be that one soulmate (or both) resign themselves to settling for a marriage that has grown apart. They believe the only option they have is to stay in a loveless marriage, where they are more like roommates than a romantic couple.

WHAT HAPPENS IF WE DON’T MAKE THEM?

These sacrifices are necessary or the relationship becomes a dysfunctional one. They are the sacrifices we need to reset our life path. Fear may be holding someone back from becoming more intimate with someone and being vulnerable. They either have to sacrifice remaining in their comfort zone or they will never challenge themselves enough to get close to anyone on a deeper level.

Sacrifice is not only letting go of things that we love or care about. Sometimes the things we use as crutches can be seen at first as necessary, important, or what is the best for us. In truth, they are what is keeping us from moving forward in life and achieving our goals. When we sacrifice those crutches we find they’re actually obstacles and excuses we create to hold ourselves back from getting what we really want in life.