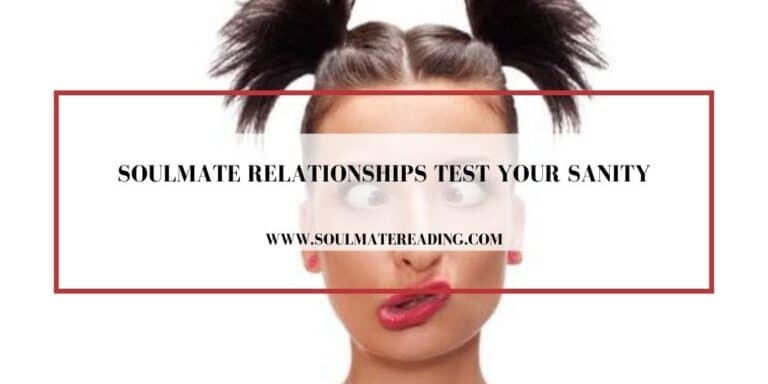 Countless people we speak to believe they’ve completely lost their minds or are in the process of losing them. They share with us all the details about the way they feel and think about their soulmate. And they literally believe they’re losing their sanity.

Some are ready, or at least they think they are, for the roller coaster ride soulmate relationships can be. Even though they anticipate what it will be like, they are shocked in many ways.

They recognize something amazing is happening to them, but still wonder if it’s real or not. The amount of readings we give where someone is asking for a validation of a connection is staggering. The way it takes over their lives is overwhelming and scary at times.

They tell us they can’t stop thinking about their soulmate and fear they’re bordering on soulmate obsession. Their feelings defy all logic. Upon initial meeting, the feelings are so strong they seem impossible to believe. They find themselves acting in strange and unusual ways.

It’s hard for them to believe they’re tolerating behaviors they never thought they would. Their soulmate should have run out of chances a long time ago. But, for some crazy reason, they’re given chance after chance.

So what is it about soulmate relationships that test your sanity?

A soulmate connection makes people feel things they’ve never felt before. Those feelings can often make them behave in ways they never thought possible. It’s easy to think your sanity is questionable when you barely recognize yourself anymore. You may have been one to set and enforce boundaries with everyone. Now you’re afraid to create and enforce boundaries with your soulmate.

What you were strong enough to do in other relationships you’re afraid to do with your soulmate. You are intelligent enough to know what you should do. You’re smart enough to recognize bad behavior. The problem is you aren’t using your intelligence as much anymore.

Your emotions have taken over all aspects of your logical mind. You actually fear doing what you know is healthy, and right. This can easily test your sanity. You are waging an inner battle between your logical mind and your extreme emotions. When emotions are the deciding factor, usually good decisions are rarely made.

Many people think the emotion of love causes them to do crazy things with their soulmate. Wrong. It may seem like love, but it’s really coming from fear. You may believe you’re letting your soulmate get away with so much because of the strength of your soul connection or the unconditional love you have for them.

That is shifting the blame outside yourself. It isn’t love or the connection, In reality, it’s your fear preventing you from doing what you know is right.

That is what it all boils down to. Your connection didn’t make you contact them after a fight that was all their fault. You were afraid they wouldn’t call you. Love is not why you are not enforcing your boundaries.

Accepting unacceptable behavior is not coming from love. It’s coming from fear. The fear is that if you do anything to fix the situation, rather than enable it, your soulmate relationship will end. When you let fear dictate your behavior and thoughts you’re not thinking clearly. Now your thoughts and behaviors become as wacky as your soulmate’s.

Any wonder why your relationship is a dysfunctional mess? What else could it be? When it gets to a point where the relationship is testing your sanity, it’s time to get your emotions in check.

Start thinking about what you know instead of what you’re afraid of. If you know things have to change then begin changing yourself. Look at how you played a part in what has been created. Begin to do what you know is right and healthy for a relationship. Stop making excuses based on fear. When you do that, you begin to bring sanity back into your soulmate relationship.