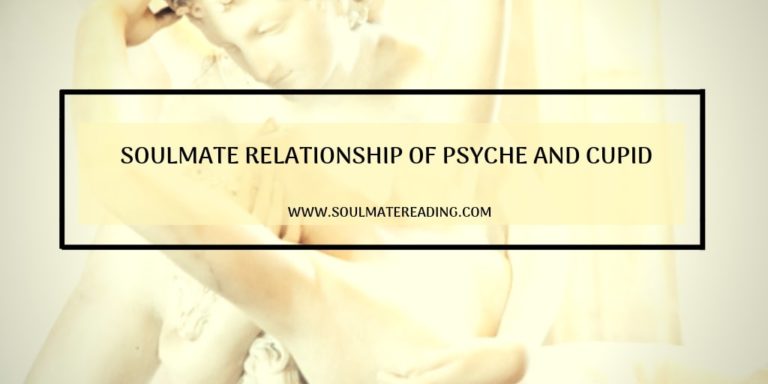 The love story of Psyche and Cupid tells all about a beautiful soulmate relationship. It’s a story from Metamorphoses, written in the second century. Psyche is the Greek word for butterfly as well as soul. The tale tells how Psyche and Cupid overcome obstacles to love and their ultimate divine union.

PSYCHE AND CUPID ARE ETERNAL SOULMATES

Psyche, then, is the human soul, which is purified by sufferings and misfortunes, and is thus prepared for the enjoyment of true and pure happiness. (From Bulfinch’s Mythology: The Age of Fable, chapter XI)

Psyche, a mortal princess, is the youngest of three daughters, known for her beauty. She is so beautiful that people begin to worship her. Aphrodite, the goddess of love and beauty, becomes enraged she lost the admiration of her people for a mere mortal. And many of her temples begin to crumble because there’s no money to repair or sustain them.

She’s very jealous of Psyche’s beauty so she summons her son, Cupid. Aphrodite tells him to put a spell on her so no man will ever marry her. As he sprinkles the potion on her, her beauty overwhelms him. Also, he pricks both of them with an arrow. Her older sisters have husbands but there’s still no suitor for Psyche. So her parents consult the Oracle, to see if she will ever find a husband. But Aphrodite also wants revenge and convinces the Oracle to tell them Psyche will marry an ugly, evil monster.

Psyche resigns herself to her fate and sits on top of the mountain every night to await her husband. And he is so hideous he only comes to her in total darkness so she can’t see his face. One night, after her sisters’ encouragement, she decides to look at his face. That night as he comes to her, she raises the lamp to his face, only to discover she’s married to Cupid.

This surprises him so he runs to the window and flies away.

CHALLENGES IN THEIR UNION

This causes her to fall to the ground unconscious. When she awakens she seeks the help of Aphrodite, who gives her three impossible challenges. After completing the first two challenges, she’s given the final challenge to descend to the Underworld and return with a box of beauty from Persephone, the wife of Hades. Even though she’s told to keep the box closed, she can’t resist the temptation to look inside. It’s filled with darkness and she falls into a deep slumber.

Cupid has to take action and appeals to Jupiter to grant immortality to Psyche. Jupiter is so moved by Cupid’s love for his wife, he gives her a glass of ambrosia, the drink of immortality. Cupid and Psyche are joined in eternal marriage and continue to live happily ever after. The story of Cupid and Psyche is the basis for the fairytale, Beauty and the Beast.

As we review the story of Psyche and Cupid we see the storyline of their soulmate relationship. Even though she believed him to be hideous, she still has unconditional love for him. They have to overcome obstacles to be together. And through it all their love for each other wins. Psyche has many adversities and life lessons,  even going up against a goddess! Cupid loves her so much he asks Jupiter to grant her immortality so they could live eternally in soulmate love.

2 thoughts on “Soulmate Relationship of Psyche and Cupid”