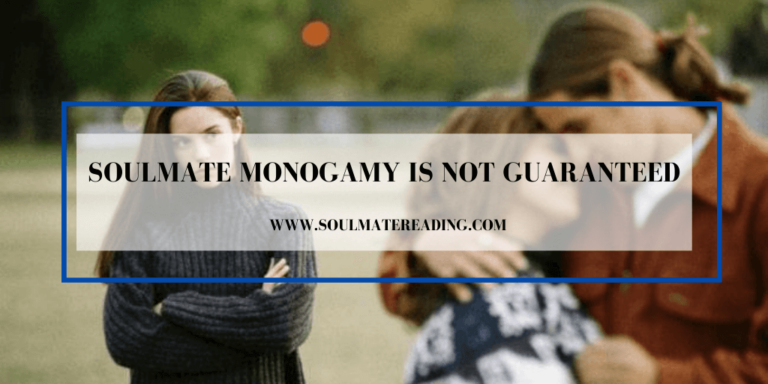 Soulmate monogamy is not guaranteed in any soulmate relationship.

CAN’T HAVE SOULMATE MONOGAMY IF THERE’S A THIRD PARTY

When an affair begins, monogamy kinda goes out the window. Sure they may say they are not having sex with their primary relationship to avoid an argument. But they could be lying about it. Until a soulmate is involved with only one person, monogamy can’t be guaranteed or expected. We know this is one of the major issues that plague soulmate relationships.

A soulmate could freak out due to the connection and purposely sabotage the relationship by being unfaithful. They could also date or sleep with other people to prove the connection doesn’t exist. It’s difficult for many people when they first experience a soulmate connection and the intensity that comes with it. Then they go through the process of denying the connection. This is not an excuse. But that intensity often intimidates and overwhelms soulmates.

When they first meet, they may ride that wave of intensity like a pro and enjoy it immensely. But then they may overthink it, attempting to have these feelings make sense on a rational level. That isn’t going to work.

Since when are feelings really rational? Most of them aren’t. So when they have a hard time rationalizing those feelings they act out in negative ways. And one of those ways is by not being monogamous. This doesn’t mean though that the relationship can’t go back to where monogamy is a part of it.

Another reason soulmate monogamy can be difficult is because many soulmates are afraid of the serious nature of the connection. When soulmates meet they know the significance of the meeting. They know they feel this person in their soul. When you don’t believe soulmates exist, and aren’t even looking for one, it can seem like to much too soon.

It’s like your soul instantly commits to this person and some people are afraid of that commitment. Even though you may not have asked for a commitment, they hear it from within their soul. So they have to try to prove to you and themselves they don’t feel this serious, by sleeping with other people.

Please don’t be under the misconception that soulmates and monogamy go hand in hand. Like every other relationship, there can and will be problems and challenges, and it is up to the couple to rise above them together.

7 thoughts on “Soulmate Monogamy is Not Guaranteed”