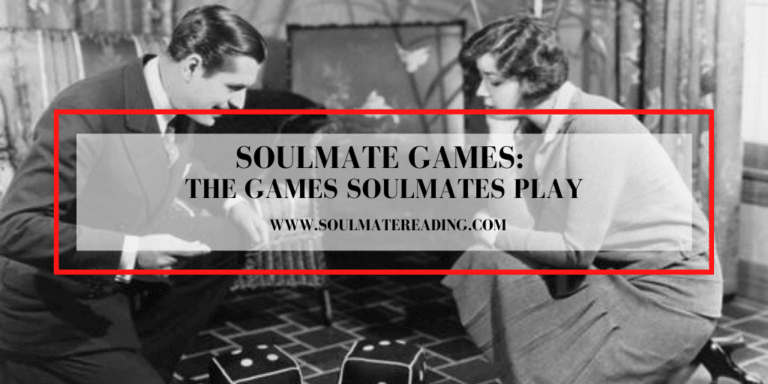 Soulmate games are pretty much the same games everyone plays in other relationships. The big difference, however, is that soulmates tend to get away with more than others.

Many people believe soulmates should be above playing games. The truth is, that’s how it should be. But the fact is, that’s not how it is.

SOULMATE GAMES THROUGH THE CONNECTION

It would be nice to glamorize and romanticize soulmate relationships and believe they’re perfect relationships with a magical connection. The real truth is, many soulmates use the connection as a way to get away with relationship homicide. It makes sense on one hand that we give our soulmate more leeway than we do any other person.

Since we feel such a strong bond with a soulmate, we’re more prone to allow bad behavior and words slide by the wayside. After all, this is such a special, one of a kind person,, so try harder to keep them around.

When we speak to people they don’t ask about meeting someone they could love who would love them in return. Nope, not good enough. They want a soulmate. Okay, fine.

So you only want a top of the line love interest. But why would you allow the relationship to be dragged through the gutter to be ruined? That makes no sense. Why buy a Chanel purse only to drop it into a mud puddle? If something has value to you, shouldn’t you treat it as valuable?

When soulmate relationships are valuable it means you’re of value. If you allow yourself to be played, manipulated, cheated on or lied to, you’re treating this rare relationship disrespectfully. You’re also being disrespectful to yourself.

Even if your soulmate is playing soulmate games with you, you don’t have to put up with it. Soulmates tend to use their soulmate connection to gain the upper hand. They may push every button they can of yours to see how you react. The more you let them get away with, the more buttons they push.

Are they playing the I’m not sure how I feel about you anymore game? Don’t totally freak out, and don’t let them get away with it. Tell them to get out of your face until they figure it out.

It’s not up to you to plead your case and beg. Its beneath you and your connection. That’s going down into the mud with them and puts you in the place of total dis-empowerment. Stand tall and stand up to them. It’s hard, we understand, but the right road often is.

One of the soulmate games they like to play is breaking up with you all the time only to come back. Instead of obsessing about when and if they are coming back, make it harder on them when they DO come back.

You could also break up with them when you see it coming. Take control of the situation, because the game they’re playing is one of a control freak, playing with your emotions. The game will not stop until they lose. Remember that. And that doesn’t mean lose you, it means losing control over you.

The bottom line is just because you found your soulmate doesn’t mean you won’t encounter any soulmate games. It’s important you take the steps necessary to maintain a healthy soulmate relationship.

Always play it smart, with your head, or you will wind up losing every game they play.