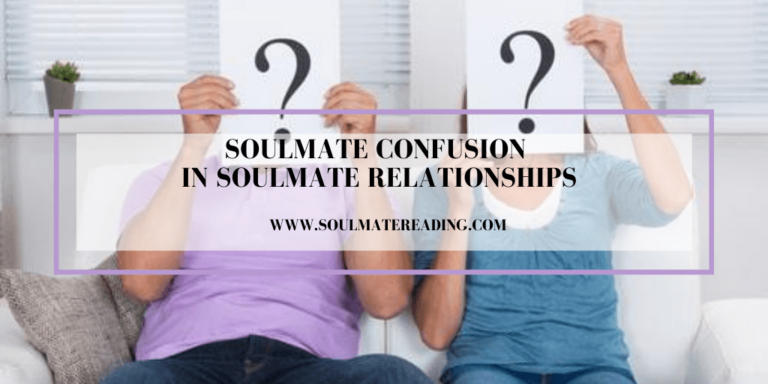 At first the connection alone brings a ton of confusion. People wonder why they’re feeling such a strong tie to someone new. It’s hard not to wonder if the connection is all in their head.

The confusion as to whether or not the connection is even real, can make people question their own sanity. They wonder what this connection means and why it’s even happening. They go to internet, bookstores, wherever they can, to find out more information.

Now they wonder if they really are in a soulmate relationship or not. What exactly is going on between them and this other person? Is it a soulmate, twin flame and what is the point of all this?

To cut through all the confusion, first and foremost, soulmate relationships do have problems. We see it all the time. That doesn’t mean they can’t be great relationships. All it means is there are issues they have to work on in order to get their relationship on the right track.

It can take a while to get there, but all soulmate relationships have the chance to work out beautifully, if both soulmates work on themselves. Keep in mind, the issues that arise between soulmates could/would come up with anyone else they meet. That is to say the individual issues of the couple are problematic. Their problems are what is keeping them from having the relationship they want.

Have you ever wondered why your relationships all have something in common?

It is because lessons have not been learned. Change has not been achieved. This is where soulmates come in. They are so much more than just a romantic relationship. They are an opportunity to shed past behaviors, triggers and reactions.

SOULMATES AND TWIN FLAMES ARE DIFFERENT

Another major source of confusion is thinking soulmates and twin flames are interchangeable. There’s a reason they are two different words. And they’re two different things and two separate types of relationships. Although very similar, as far as a connection, depth and intensity of feelings. But here is one huge difference, although not the only difference.

Twin flame relationships are easy relationships. Soulmates go through a period of difficulty until changes are made. So many people talk to us about their twin flame and all the problems they’re having. But if they understand the difference they know the person they believe to be their twin flame is a soulmate.

One is not better than the other.

We also must cut through the confusion that one relationship, twin flame or soulmate, is better than the other. Although soulmate relationships do have their share of drama, it’s the fault of the couple, not the universe. The relationship can be as drama-free or drama-ridden as you two make it.

One connection is not better than the other. And if you’re getting hung up on labels you’re missing the point entirely. That’s coming from ego not your soul. Ego has no place on a spiritual journey.

There’s also an area of soulmate confusion that’s about emotions. Soulmate connections run both ways. You can’t turn your feelings on and off for them, they can’t do it for you either. Just like you can’t stop thinking about them, they cannot stop thinking about you. They may be better at dealing with it, or hiding it, than you are. But they don’t possess superpowers.

There’s a lot of soulmate confusion out there. And that’s why we are constantly writing articles to help you get clarity. We want you to have the information you need when you connect with your soulmate.