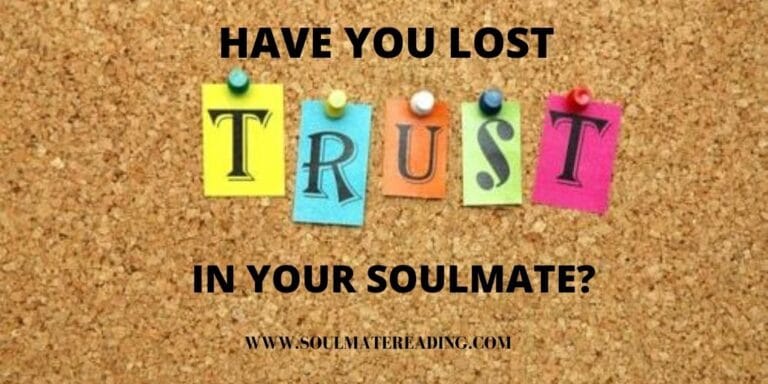 Have you lost trust in your soulmate?

Do they do or say things that causes you to distrust them? Does your soulmate have so many issues you’re not sure you can believe a single word they say? Do you wish you could trust your soulmate but you can’t because of your past?

It’s hard for many people to trust anyone these days. When trust is broken between soulmates, it feels like a betrayal. It’s devastating and that trust is so hard to build back again.

LOSING TRUST IN YOUR SOULMATE

So what can you do if you no longer trust in your soulmate? Is there a way to rebuild it? Or is it a losing battle?

Let’s say your soulmate promises to take you to the movies this weekend. The weekend comes and you’re no longer in the mood for the movies. Then your soulmate tells you they made other plans. Now, you don’t mind missing the movie. You didn’t really want to go. But you’re upset and disappointed that they broke another promise.

Many people don’t realize the significance of breaking promises and not staying true to their word. They’re actually shocked when people lose faith in them. They don’t realize their words are their currency. And each time they lie, or break a promise, they diminish the value of their words and the level of trust that goes with it.

Your soulmate needs to understand their words meant nothing. So for your soulmate to use words to rebuild your trust in them is absolutely ridiculous. How could that possibly work? It can’t. Words won’t be enough for you. Mainly because you see their words don’t match their actions.

Words are not going to cut it, actions will.

You both need to understand trust doesn’t come back instantly just because you have a conversation about it. Once you’ve lost trust in your soulmate it takes a long time to rebuild. You can’t bring it back in one conversation or in one week.

Your soulmate has to accept that it could take months, or longer. They’re going to have to do the work to restore your faith in them. Don’t let them make you feel guilty for not trusting them. Your soulmate proved to be untrustworthy which was not your fault.

You wanted to trust them. But they broke it and now they have to repair it. All you’re required to do is give them the chance to rebuild the lost trust. If both parties are open to it, trust can be rebuilt in soulmate relationships.

5 thoughts on “Have You Lost Trust in Your Soulmate?”