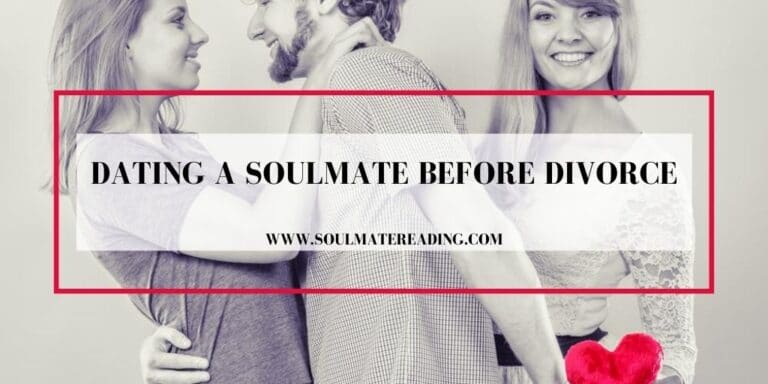 Dating a soulmate before a divorce happens more often than one would think. We cannot tell you the amount of times we hear from people who meet a soulmate while one, or both of them, are married.

Prior to meeting their soulmate, most consider divorce. For whatever reason, they decide not to act on it. But then a soulmate comes into their life and they now must face the reality that is their marriage.

DATING  A SOULMATE BEFORE DIVORCE IS STILL AN AFFAIR

Soulmates often meet, begin dating, and carry on affairs because both of them are not single. Regardless of how far along you are in the divorce process, until you’re divorce is final, you’re having an affair. The intensity of the connection between soulmates makes it very difficult to wait until a divorce is final. This is why dating a soulmate beforehand happens so frequently.

When you meet a soulmate, you want your life with them to start immediately. They are all you find yourself thinking about and you throw caution to the wind. A divorce is a serious decision to make. There are many different variables and a lot to untangle.

Rarely is a divorce quick and easy. It can really complicate matters if the two of you are caught by a current spouse. The anger and sense of betrayal they feel is understandable. This can make for additional problems with the divorce proceedings. Tactics can be used to drag out the divorce, get the children involved, and they often work.

The drama of a divorce can bring out the worst in all of us. It is hard to stay classy, calm and sane when the other party is behaving the opposite way. You may not want to go to war with your soon to be ex and would prefer the divorce is amicable. But if your soon to be ex learns you meet a soulmate, World War 3 may seem tame.

If you begin dating your soulmate before hiring an attorney, or filing for divorce, you’re probably making the wrong move. Instead of beginning an affair, begin the process of ending your marriage.

First things first. Your soulmate is so important you’re willing to lie, cheat and risk everything. So shouldn’t they be important enough for you to hire an attorney and file some papers?

So do the right thing.

When you begin dating a soulmate before a divorce you take your sacred relationship and disrespect it by lying, cheating and everything else that comes with an affair. If this connection is so strong, and this person means that much to you, then keep your soulmate in your life. But work on your future together by properly by getting closure on your past.

Don’t let someone use excuse after excuse as to why they can’t get divorced. If they can’t, then they can’t have you. Often a soulmate is supposed to make you realize a part of your life (such as a marriage) is over. Additionally, they’re the catalyst you need to make changes you’ve been avoiding. By having an affair you’re still avoiding the changes you need to make, so expect the problems that come with avoidance.

Many people choose to get involved (and yes it is a choice) with their soulmate while they’re married. If you’ve remained in a long term affair, it’s time you accepted reality.

The reality is, if you don’t put your foot down, you more than likely will be just having an affair years down the road. It’s one thing to wait until the divorce process is over. It is another to still be waiting for a divorce process to even begin.

4 thoughts on “Dating a Soulmate Before Divorce”