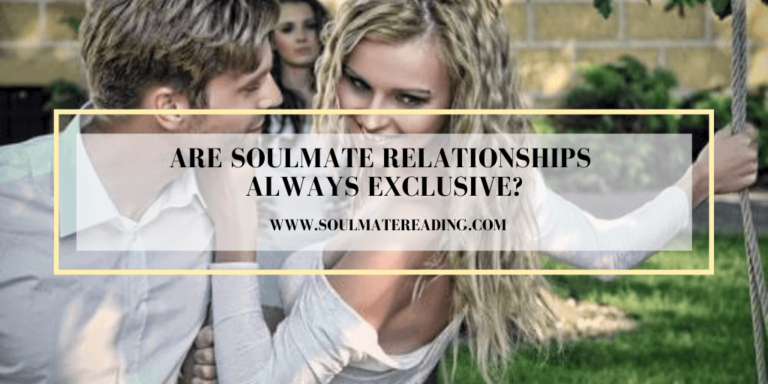 Are soulmate relationships always exclusive? No, not always they’re not.

A spiritual connection doesn’t automatically come with exclusivity. The couple is responsible for adding that to the relationship they create together.

The choices they make determine the quality of their relationship. It’s up to them to decide if they are going to raise or lower their standards.

Upon first meeting most soulmates really do want to be in an exclusive relationship. Along the way though, something goes wrong. Just waiting for exclusivity is not a good idea. If you see your soulmate relationship declining, you must act on it. Fear may be keeping you from taking a stand and you must work through it.

ARE YOU READY TO BE EXCLUSIVE?

Many people are afraid if they give their soulmate an ultimatum, they’ll walk away forever. So they stay in a soulmate relationship that doesn’t make them happy. All this does is causes anxiety and angst. It also makes the balance in the relationship way off kilter as well.

Are you moving forward towards being exclusive or are you stuck in a rut? Can they make up their mind or are they still playing the field? Soulmates are supposed to bring out the best in one another. However, their free will can actually bring out the worst in each other.

REASONS WHY THEY CAN’T

There are reasons why soulmates are not always exclusive relationships. Sometimes they cross each other’s paths when they’re involved with other people. They’re not ready to end their relationships. On the other hand, they also feel powerless to ignore the connection they have with their soulmate.

Sometimes one soulmate get spooked because they’re not ready for the deep emotions and vulnerability that comes with a soulmate. They’re afraid to deal with the strength of their emotions because they feel out of control. Lack of control is very uncomfortable to them. Instead, they run to someone else they feel safe with.

It could also be that they know, deep down, this is the one for them but don’t feel ready to settle down just yet. So although they don’t want to see anyone else, they won’t call their relationship exclusive. They just don’t feel ready to face the reality of the situation.

There are some soulmates who abuse the connection to get away with bad behavior. They test their soulmate to see if they will stick around without them having to be exclusive. If their soulmate goes for it and puts up with it, then they are off the hook. Then it’s their soulmates problem to deal with, not theirs.