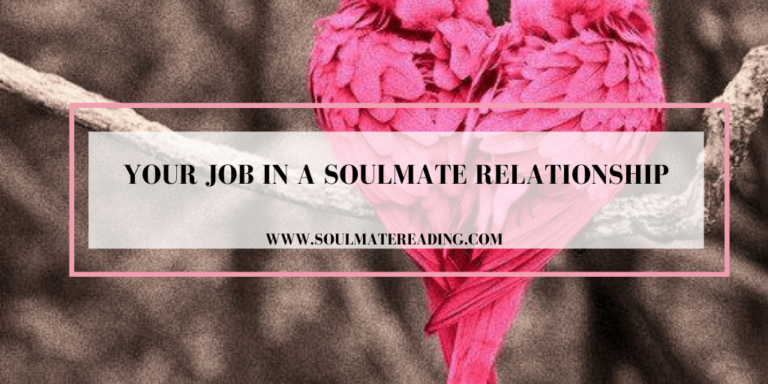 Your job in a soulmate relationship is not to simply sit back and enjoy the love and romance. Quite the contrary.

Soulmates, on the other hand, will endure tests and challenges. And if you don’t pass the tests and learn their lessons, they’re repeated, over and over. Then the work becomes harder and harder. A soulmate’s job is to assist their partner’s growth as well as their own.

You can’t take on doing their work for them. And you shouldn’t enable them to do the exact opposite, as many soulmates do. If you try either of those tactics, you’re keeping them from growing and evolving. You’re also preventing yourself from doing what you need to do. It’s surprising how many people in soulmate relationships aren’t doing their job.

So what is exactly is your job in a soulmate relationship?

Because each soulmate relationship is unique, there’s no blanket answer that covers everyone. You must figure it out on your own, but with the help of your soulmate. You’ll both bring up things in each other that must change or heal in order to take your relationship to the next level.

If that’s not accomplished, the soulmate relationship becomes a disaster. This is why many people have say soulmates are a curse, and not a blessing. Each soulmate needs to address what’s causing crisis in their relationship.

Let’s say one soulmate is afraid of the connection.

So they decide to sabotage the relationship by turning their back and dating other people. They refuse to make a commitment to their soulmate. And if they do, often change their mind.

One of the soulmates may beg for a commitment. This allows them to remain in a dysfunctional relationship with a soulmate who’s seeing someone else. Or multiple people. And all because they fear their soulmate will forget about them and wind up with someone else. Neither one of them are doing their job.

For instance, Brenda should be releasing her fears of the connection. She should accept it, acknowledge it and take a leap of faith. But Brian is supposed to overcome his fear by trusting in the connection. And do what’s right for his personal growth. Brian is supposed to end it until they can give their relationship a real chance. He is also supposed to take a leap of faith. But has surrendered to the fear Brenda created. This is actually keeping them from doing their job. See how it works?

Soulmates should have faith in their connection so they can do their job. When they don’t have faith fear and doubt creep in and they actually wind up doing things that sabotage their soulmate relationship. Many times they are so focused on what they think their soulmate is doing, rather than figuring out what they should be doing. So if you have found yourself in a dysfunctional soulmate relationship, chances are, at least one, if not both, of you isn’t doing their job.

3 thoughts on “Your Job in a Soulmate Relationship”