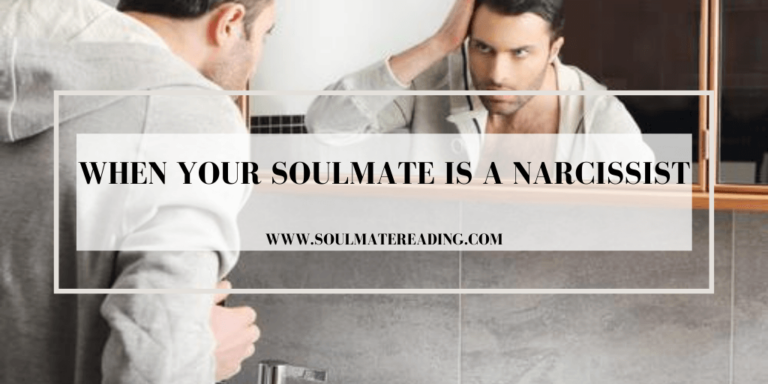 If your soulmate is a narcissist, you may not know from the beginning. A narcissist likes to project a relationship forward very quickly in the beginning. Part of this is because they don’t want to go slow because it will take too much time and effort to get you on their hook. They need to catch you and catch you quick.

Your soulmate will seem very charming at the beginning. It may be flattering someone has become so enamored by you so quickly. And they they’re giving you so much time and positive attention. The problem is that you will wake up one day and realize they’re not who you thought they were.

You were so excited to finally meet your soulmate. But you ignore the red flags and convince yourself they were no big deal. You excuse their bad behavior because they’re so wonderful that it was reasonable for them to make a “little” mistake once in a while. The good far outweighs the bad but when the bad outweighs the good you realize exactly how narcissistic they really are. You begin to try everything to make them and the relationship go back to what it was in the beginning.

You may remain in denial for a long time. And you don’t want to admit he soulmate you now know is who they really are. It’s hard to let go of the fantasy of what they were. Until you do, you’ll try everything to rationalize why things have gone so wrong. You may even take a lot of the blame on yourself!!

And that’s actually what a soulmate who is a narcissist wants you to do. They’re never at fault, you always are. They never mean to hurt you, you’re just too sensitive. If you didn’t make them so angry, they wouldn’t have said those things to you. Your feelings are never addressed, they’re dismissed. It is all about how they feel.

THEY WILL NEVER PUT YOUR FIRST

You may think if you put them first they will put you first. But when your soulmate is a narcissist they put themselves first. And want you to as well. Because of the connection between soulmates, many people have a hard time standing up to theirs. They go from being an empowered person who doesn’t take nonsense and drama from any one. And become someone who is emotionally and mentally manipulated on a daily basis.

A soulmate who is a narcissist will never apologize, but they will make you apologize for everything they find fault with about you. They are never wrong. And they refuse to accept responsibility for anything that’s wrong in their life or in your relationship. We are shocked by how many clients are willing to make excuses for a person they believe has a hard time saying they’re wrong or apologizing properly. Every human has the capability to do it. So it’s a choice of either doing it or not doing it.

Many narcissists have issues with responsibility. They may not hold down a job and have terrible credit. And they don’t know how to live within their means and avoid normal chores. They’d rather have you take care of all that for them. And then complain you aren’t doing a good job at it. They will also have excuse after excuse as to how someone else causes all these problems for them. Because of course they couldn’t be responsible for it. They never do anything wrong remember?

They don’t want to be a regular person. And see themselves as better than the general public, who are beneath them. A responsible person is more than willing to take any job if they’ve lost a good one because they have to support themselves and their family. But if a soulmate is a narcissist they won’t take a job they deem beneath them. And would rather mooch of you, or others, until they get a job they feel they deserve.

The attention levels that a soulmate who is a narcissist require are just too hard to handle. It’s never enough for them, and since it’s not enough, you must suffer. They may give you the silent treatment, or lash out at you and fly into a rage. You will feel as though you are being bullied, and you are. If you have a soulmate relationship like this, you have to stop accepting any responsibility for what they do or don’t do. It’s not your fault. You aren’t controlling them or making them do this. It’s on them. The first step to trying to turn this around is to stop accepting their manipulating tactics. Soulmate relationships are hard enough, but one with a narcissist is ten times worse.

6 thoughts on “When Your Soulmate is a Narcissist”