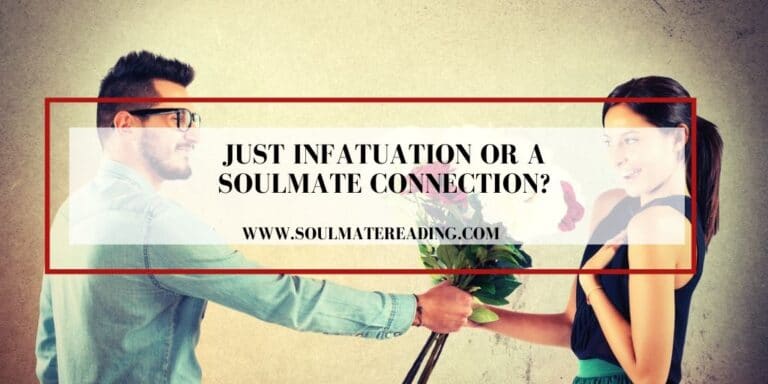 Infatuation often makes people mistakenly believe they have met their soulmate. When soulmates first meet they feel intensely towards one another right away. When you’re infatuated with someone, you feel similar intensity. But they don’t always have the same feelings towards you. A true soulmate connection goes both ways. Feelings of infatuation aren’t always reciprocal.

DIFFERENCES BETWEEN INFATUATION AND SOULMATES

When soulmates meet it’s impossible to get each other out of their heads. There can be intense focus on an important work project but thoughts of their soulmate drift through their head. With infatuation, it’s more like a conscious effort to daydream about the object of their desire. And it’s usually one-sided.

Soulmates have a lot of chemistry and passion in their connection. But it’s way deeper than just that. With infatuation it’s usually just chemistry. And nothing else. Sure, the sex is out of this world, but it doesn’t go any deeper with infatuation. Too many people try to make a soulmate out of a sexual relationship, when the connection is only in the bedroom.

In many soulmate relationships, the beginning is a whirlwind of emotions. The relationship easily moves too fast. Everything and everyone falls to the wayside while the two soulmates consume one another. If they usually give 100% to their job, that’s out the window. They are MIA to friends and family because they’re spending all their time with their soulmate.

COMING BACK DOWN TO EARTH

Then comes an adjustment period. And it can be very awkward. Soulmates will have to come back down to earth and find a way to fit their soulmate into the rest of their lives. Once the adjustment period is over, they’re still going strong and mesh well into each other’s lives.

When it comes to infatuation, things can move very fast as well. If both parties are infatuated, they can act like they are crazy about one another right away. They too spend almost all their time together at first. And they drop their responsibilities and people closest to them for a period of time. However, when reality sets in for these infatuated two, the romance and excitement fizzle out. It goes from 100 to 0 in record time. It never goes back to the way it was in the beginning. And it ends as abruptly as it began.

Soulmate connections don’t have an expiration date. Infatuation doesn’t have a long shelf life. When soulmates meet, they feel instantly comfortable with one another. There’s a freedom in being able to express themselves more openly than with anyone else. They feel they can be their authentic selves for the first time. And they experience acceptance,  flaws and all. Infatuated folks however are not comfortable. They are insecure.

They work to hard to impress and won’t reveal who they really are for fear of rejection. So they really don’t get to know one another. They put forth what they think the object of their affection wants to hear or what will impress them. Soulmates accept one another’s flaws and help them grow. And they nurture change within each other.

People who are just infatuated put the other on a pedestal. For them the object of their infatuation is perfect. They have no flaws. Not that they could see them anyway. This is not realistic and of course setting the whole thing up to fail. The expectations when one is infatuated are way to high and no one can live up to them. That is one reason why infatuation never lasts, where a soulmate connection never ends.

2 thoughts on “Just Infatuation or a Soulmate Connection?”