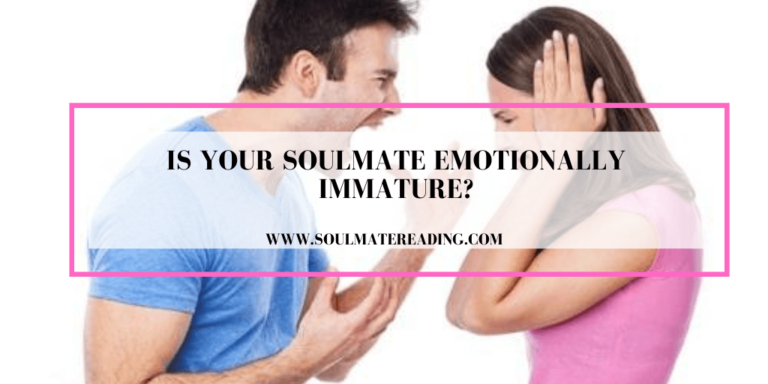 Is your soulmate emotionally immature and causing problems in your relationship?

Do they exhibit inappropriate behavior that drives you nuts and causes friction between you?

Does your soulmate say rude comments in front of your family members during holiday parties?

Do they act out in public or throw tantrums like a three-year old?

Is your soulmate so emotionally immature they don’t act responsibly and cannot be counted on?

It’s very difficult to have and maintain a relationship with a soulmate who acts like a child.

If your soulmate is emotionally immature, your feelings won’t matter to them. The only feelings they care about are their own. They will of course expect you to care about theirs, even though yours will not be acknowledged or validated.

They also won’t care about the feelings of those closest to you either. Where most people are polite and want to make a good impression, they won’t really care. They might even purposely be rude to your friends and family.

They will have a hard time committing to plans, either pulling a no-show or coming up with excuse after excuse. You have to drop everything for them even at the last-minute. But your plans, they will easily wiggle out of.

They will think only of “me”, not “we”. They talk about places they want to go and don’t really ask about where you want to go. If you express your own desires, they will steer the conversation back around to their desires.

They will order a drink, or something to eat, and fail to ask if you would like anything until you speak up. They aren’t up for sharing either. Of course an emotionally immature soulmate will expect you to share everything with them.

An emotionally immature soulmate will be very selfish in their behaviors and actions. Even if you don’t like flowers, they will buy you flowers for your birthday, because they like sending flowers.

Your birthday cake will even have to be a cake they like, or they won’t get it for you. If there’s nothing in it for them, they won’t do it.

They put their friends before you. They will find all the time in the world to be there for their friends when they need them. You? Not so much.

There’s nothing wrong with showing respect to one’s friends and family, but they need to show it to you and yours as well.

An emotionally unavailable soulmate, of course, will be emotionally immature. They don’t want a relationship, but they want you at their beck and call.

Expressing their feelings is off limits, because they may not have any. They won’t be there when you need them. An emotionally immature soulmate will play games with your emotions and your head.

An emotionally immature soulmate is never wrong. You always are. They throw tantrums and hold grudges for the smallest thing. Their emotional response to a disagreement is to go over the top.

Forget about trying to diffuse things or make peace, they want World War 3. The damage they create is devastating.

An emotionally immature soulmate doesn’t want a partner, they want a parent. They want to depend on you for a lot of things, then will resent you for it later. You will hear “Stop acting like my Mother/Father”. In reality, they keep acting like a child so you have to take on the role of parent.

An emotionally immature soulmate can’t handle criticism of any kind. Even if they ask you to be 100% honest, and beg for your honest opinion, you’re in trouble if you give it. They aren’t looking for honestly, they are looking for sugar coating and boosting their ego.

An emotionally immature soulmate will be financially dependent on someone. That someone is probably you. They will of course have someone to blame.

If you look at their history you will see a pattern of going from their mother’s house to living with a romantic partner. When that relationship ended they go back to their mom’s, then lived with another partner.

You won’t see where they get their own living space. They don’t want to and of course have tons of excuses for it.

Do you have experiences with an emotionally immature soulmate? Please share with other readers of our blog in the comments section.

3 thoughts on “Is Your Soulmate Emotionally Immature?”