Home Relationship Issues and Concerns Has Your Soulmate Lost Their Feelings for You?

Has Your Soulmate Lost Their Feelings for You?

Has your soulmate lost their feelings for you? Have they gone from a loving, caring person to a cold, unfeeling person you no longer recognize? Soulmates, for many reasons, always seem to worry about the other losing their feelings. In some ways it’s understandable. Soulmates think their own feelings are so strong and overpowering. So they think their soulmate must surely feel the same way. Any time the couple has a fight, or don’t have communication for a few days, they assume their soulmate’s feelings have vanished. This is not true.

IT’S NOT ALWAYS BECAUSE THEY’VE LOST THEIR FEELINGS

Soulmates tend to love hard and fight hard. Struggles soulmates face cause fear to surface that one day their soulmate may lose their feelings. It’s hard for them to comprehend that someone could love and care for them as much as they do their soulmate. They also question how someone who loves them, as much as they claim, could distance themselves, go silent or mistreat them. So they draw the conclusion they’re losing their feelings. Otherwise they wouldn’t do this. Again, not true in every case. 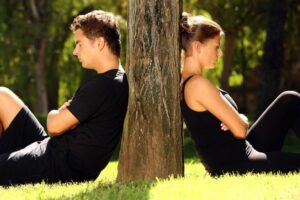 Has Your Soulmate Lost Their Feelings?

Soulmates can misbehave, just like the rest of us. And they’re not on their best behavior when they fight. This is most likely to occur before soulmates have learn their lessons. Even if your soulmate reveals they may be losing their feelings for you, don’t believe them just yet. It could be something they’re saying to keep you on your toes. Or it’s something they’re saying to sabotage your relationship for one reason or another.

When something like this occurs, take a long, hard look to see what may really be causing this outburst. It may be something deeper or even something they are avoiding. They may be using their words as a way of distracting you from the real issue. You should be smart enough to assess your relationship. And look at what you’ve done or said to know if there’s any good reason for them to say that to you.

If your soulmate claims they’ve lost their feelings and want to move on, you have no choice but to let them. You can’t convince them or beg them to stay. That won’t work in your favor. You may have to sit still and wait it out for them to realize their feelings haven’t faded, or they’re willing to admit they never really lost their love for you. It’s a very hard thing to go through and very painful. You may want to do all you can to stop them from leaving but this never really works. If someone wants to leave, they will leave. But that does not mean they won’t come back.

Soulmate relationships do end, not all of them work out. If the relationship is problematic and the couple will not learn the lessons they need to, the relationship may come to an end. But even then, it does seem in so many cases, that soulmates never really lose their feelings for each other, even if they’re apart.