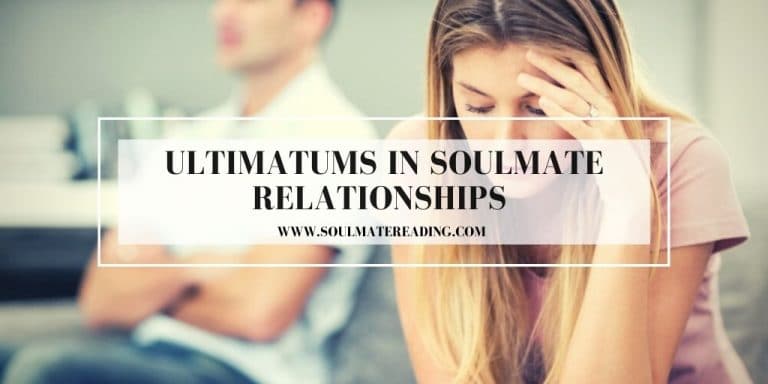 Ultimatums in soulmate relationships can be very effective, if used properly.

A soulmate crisis point is a pivotal window of time in the relationship where something drastic must be done. This is a time when talking won’t do anything or be taken seriously. It is also a time where the soulmate relationship will almost always change for the better, or for the worse.

This is not a time to make excuses or succumb to your fears. It’s the time for you to face your fears and do what’s best for the soulmate relationship in the long run. What you excuse now will not only repeat itself over and over, but it will get worse than you could imagine. It’s time for ultimatums, both verbal, and with follow-up action.

Without the follow-up action, the words are worthless and your soulmate learns your words are worthless. Bad lesson for them to learn, and for you as well. Your word should always mean something, both to yourself and your partner. Sometimes the punishment has to fit the crime.

Do not be afraid to use ultimatums in soulmate relationships to wake your partner up to the fact they may lose you.

Let’s give you an example. Let’s say your soulmate has been sabotaging your relationship by partying too much and too often. Their partying is causing friction in your relationship and causing problems at their job. They stay out too late and show up tired. You can no longer avoid the problem and are definitely at a soulmate crisis point.

You tell your soulmate that the partying has to stop or the relationship is over. So what happens next?

Your partner does it again.

Now here is another soulmate crisis point because what you do now is most important. If you simply yell at them, give them the cold shoulder, or leave for a few days, you blew it. Your soulmate has now learned they can continue to do whatever they want and all that will happen to them is some minor punishment. They also realize they won’t lose you.

They will do it more, and more often, and it can easily get to the point where their behavior causes problems you never saw coming! Now they may make friends at the local bar and stay out all night. Or these friends may constantly be at your house until all hours of the night.

Saying an ultimatum just won’t work. It’s just words. The actions when they challenge you are what truly matter. The more serious your action, the better chance you have of them learning their lesson and never doing it again. The weaker your action, or lack of it entirely, will almost certainly guarantee they will do it over and over again.

Ultimatums in soulmate relationship are often a necessity and can garner either the best or the worst results. So if you’re thinking of giving your soulmate an ultimatum, know that if you don’t commit to it 100%, you’ll just make things worse.

7 thoughts on “Ultimatums in Soulmate Relationships”