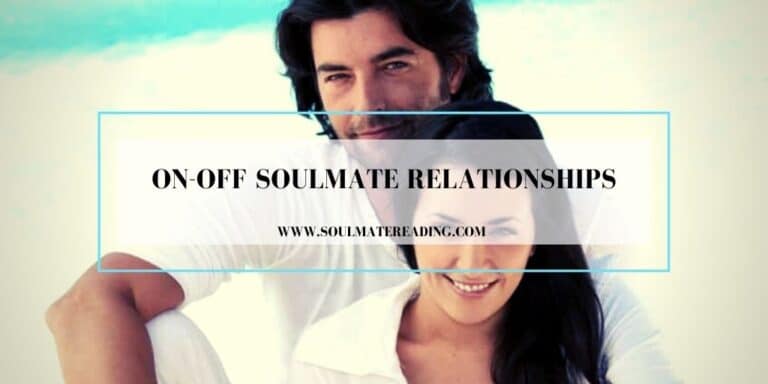 Are you in an on-off soulmate relationship? Does your soulmate come and go out of your life without warning? Do they return acting as if nothing is wrong?

Are you having an on-off soulmate relationship because someone else is in the picture? Does your soulmate end your relationship for no good reason only to come back months or weeks later begging for another chance?

Does your soulmate make promises they’ll never leave again only to break that promise repeatedly? Are you sick and tired of your on-off relationship with your soulmate?

Have you asked yourself why do they keep doing this?

It’s really quite shocking how many soulmates are in on-off soulmate relationships. Sometimes the intense connection and flood of emotions creates the need for a cooling off period. It can be so overwhelming. So they feel the need to get away for awhile. Some may even do so in an effort to hide their emotions or deny them all together.

Some soulmates meet when they’re not technically single. Regardless of the state of their current relationship, they haven’t ended it when a soulmate enters the picture. Meeting a soulmate when they least expect to can be very unsettling for some people. And they’re not ready to any embrace changes they need to make to maintain a soul connection. Some aren’t ready when they meet a soulmate partner. So they’re caught off guard and just run away.

THE OFF PERIOD IS CHALLENGING

Yet they hope there will be a reunion. The pain, stress, and depression is excruciating. They attempt to move on but experience a feeling there’s unfinished business. And they secretly hope their soulmate will return.

Friends and family stop offering support for the on-off soulmate relationship if it becomes too much of a roller coaster. This will leave someone feeling even more alone and isolated.

In those hours of isolation they wonder why their soulmate doesn’t feel the same way they do. And they start to believe love was not reciprocated. If a soulmate remains in another relationship, or leaves them for someone else, they think it’s because they care more for the other person.

An on-off soulmate relationship is very destructive and can continue in that cycle for years, or decades, if nothing is done. The damage done during these cycles is astronomical. The abandoned soulmate usually reaches a point where they can’t take it anymore. And in order to save their sanity, they begin to shut the door.

If you have found yourself in an on-off soulmate relationship you need to understand the importance of putting an end to it yourself. Not the relationship, but the cycle. It will not be easy and expect it to take a long time. But until you start doing something, don’t expect the cycle to end on its own, because it won’t. They won’t stop it, you have to.