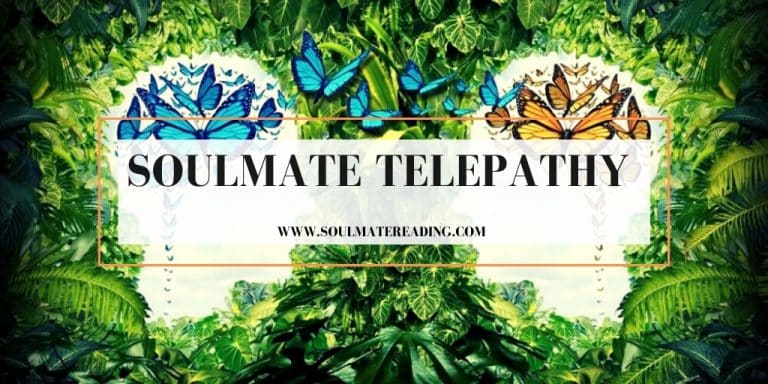 Soulmates periodically pick up each others thoughts and feelings. Some get a specific message, as if they have read their partner’s mind. They will sometimes answer a question that hasn’t been asked by their soulmate.

As for emotions, they may know the mood of their soulmate before seeing or speaking to them. But not every soulmate couple experiences the same frequency or intricacy of their messages. As with everything else involving soulmates, there are some generalities for all couples. But the union, relationship, and connection are unique for each soulmate couple.

Usually it’s one partner who has the thought first, while their soulmate immediately picks up the telepathic message. It’s also commonplace that one partner receives the information more often than the other.

Many of our clients experience this right after meeting their soulmate for the first time. In endless talks, that last for hours, they often find themselves sharing the same words verbatim as their partner.

They also reach for the remote control at the same time. Calls and texts to each other come at the exact same time. They may suddenly think of a song they love only to have their soulmate start humming that song within moments. There are so many ways soulmate telepathy works. Soulmate telepathy gives their relationships another depth level of communication and understanding.

Thoughts communicated via telepathy can often happen in dreams too. One soulmate wakes up and decides to share a really weird dream. As their soulmate listens to the dream, their mouth drops open in shock, because they had the same dream.

In many cases both soulmates are in the dreams as well. They also find that while they have a hard time remembering most dreams, they seem to remember, in great detail, their shared dreams.

Sometimes what is shared via telepathy is not always specific, but a bit general. Rather than hearing word for word the fight their soulmate had with their boss, they just know there’s a problem with the boss. These messages help soulmates be supportive, sympathetic or whatever their soulmate needs them to be without saying a word.

Soulmate telepathy can help the couple stay in tune with their partner in a way that helps resolve conflict. They can reach the same conclusion as to how to resolve conflict, and avoid conflict in the first place, by knowing the right time and place to have a discussion about it. Just like empathic connections, telepathic connections are another special gift that comes with the special connection between two souls.

2 thoughts on “Soulmate Telepathy – Sharing Thoughts With Your Soulmate”