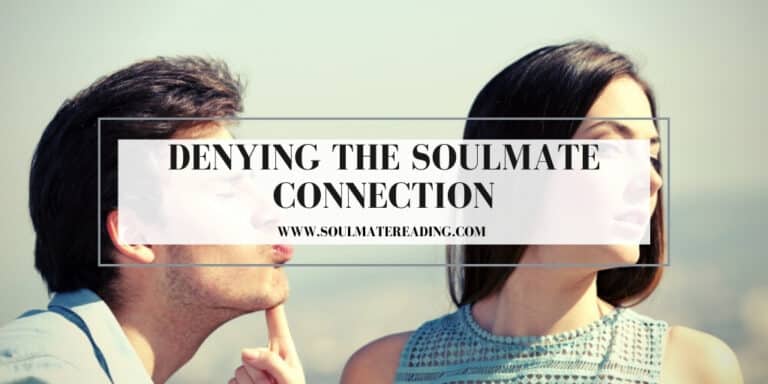 Denying the soulmate connection usually happens right after the whirlwind of the initial meeting.

At first, both soulmates get swept away with their emotions and enjoy the ride. Then reality sets in and they begin to question the connection ever existed.

DENYING THE SOULMATE CONNECTION IS REAL FOR MANY COUPLES

You can try to explain what it feels like, but words don’t do it justice. For so very many people, the intensity of the connection is so strong it scares them. Falling so hard, and so fast, makes them question why they have this time.

Sure, it could be the connection. But logically, that doesn’t make sense to many people. They shouldn’t feel this much this quick. To top it all off, those who’ve been hurt before come to realize the longer they’re with their soulmate, the greater the chance of getting hurt. Now is about the time where they begin denying the soulmate connection altogether.

FEAR IS A CATALYST TO DENYING THE SOULMATE CONNECTION

Soulmates can fear getting caught up in a whirlwind romance. Human beings feel a need to understand, and even prove, what they’re experiencing is real. In doing so, they must be the devil’s advocate for everything they’re feeling.

Although it feels like they’ve known their soulmate for a long time, logic tells them they’ve just met them. Everyone around them may even be telling them it’s too soon or you guys are moving way too fast.

Many come to the conclusion that all relationships start off great and that this is nothing special. Sure, there may be great chemistry, but that’s about it. A great way to prove it’s not a real soulmate connection would be to end the relationship, right? Right, and that’s why so many people do it.

When denying the soulmate connection some may not end the relationship yet they keep it from progressing. They feel vulnerable, and to stay safe, they try not to get in too deep or too serious.

THEY’RE STILL IN ANOTHER RELATIONSHIP

Your soulmate could be in another relationship. That relationship may have run its course but they just haven’t let go. The connection you share is helping them see the light and show them what they should do. They know they need to end that other relationship and should stop putting up the inevitable. Settling was their way of dealing with their dissatisfaction in their other relationship.

Now you, their soulmate, show up out of the blue. They weren’t expecting it, nor did they seek you out. The universe just threw you together. So they weren’t ready to deal with this issue. Now they feel pressure to do something they really weren’t planning on doing any time soon.

They may start a relationship with you because they can’t resist the connection to you. Still, they procrastinate and come up with excuses of why they’re not ending their other relationship. If the two of you get caught, they may not use that opportunity to end the relationship to be with you.

It just seems all too fast and all too soon.

Instead, they push away their soulmate by denying the soulmate connection. Even though they know it won’t work in the long run, they decide to stay and try to work it out. But of course it won’t work out, they’re just taking what they think is the easy way out. Fear took over.

They go back to their miserable life, knowing that so much better is out there. But for right now they choose to settle for a relationship with someone that hasn’t been working for a long time. Rarely does this work, because it’s a fear based decision. Sure, they can pretend on social media they’re the world’s best couple and are happy. Big deal. I could claim to be a koala bear on social media, but that doesn’t make it true.

When your soulmate is in denial, it is very frustrating. Unfortunately there’s nothing in your power to change that. You have to wait for them to be willing to accept the reality of your connection.

Has your soulmate ever denied your connection? Or perhaps you yourself have denied the connection to your soulmate. We would you to share your experiences in our comments.

7 thoughts on “Denying the Soulmate Connection”