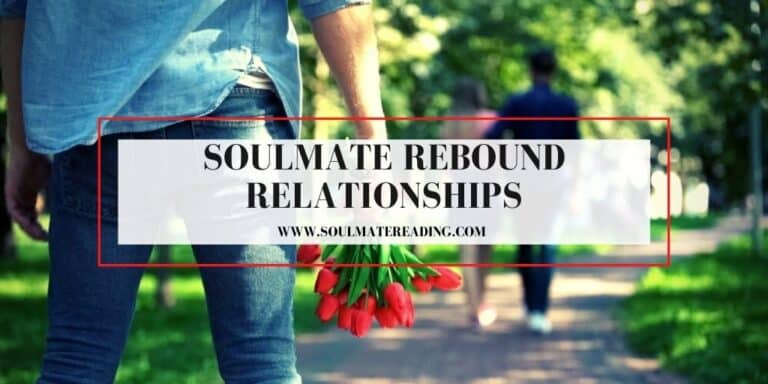 Soulmate rebound relationships are quite common.

Soulmate rebound relationships are disrespectful to the spiritual  connection. They present a lesson for each member of the couple. If they continue to be on/off relationships, then neither have learned their lesson.

There are several reasons why a soulmate has a rebound relationship. Let’s start right from the beginning.

When soulmates meet the connection is so intense.

No one really understands what it feels like or how overwhelming, and all encompassing, it can be until they meet theirs. For this reason alone, many soulmates go into a state of denial. Many of these soulmate connection deniers will go directly to a rebound relationship.

They may run back to an ex they know is no good for them on the rebound. They may also take up with someone new, while in reality they’re not emotionally available to this new person. The soulmate left behind is wondering how their soulmate moved on so quickly.

They start to question whether or not the connection between them was even real, even though they still feel it themselves. They start thinking the connection only goes one way. Questioning the reality of the soulmate connection is another step they take in the process.  The connection was there and is still there.

In an effort to run from the connection, and not deal with it, the soulmate denier quickly gets involved with someone else. It’s a layer of protection they’re using to try and convince themselves they’re back in control of their emotions. But it goes without saying they’re kidding themselves.

All they have really done is get involved with someone they’re using as a buffer. This is how they avoid dealing with their soulmate. Although some sympathy can be given towards those that are being used this way, common sense should tell them it was too soon to enter into a relationship with someone who recently ended one.

Another one of the reasons soulmates get involved in a rebound relationship is during the growth period of that relationship. When soulmates meet, there’s that feeling of this is the one. For many people that’s a source of joy. But for others, it can bring on a lot of fear and discomfort.

IT’S EASIER WITHOUT THE DEEP CONNECTION

We don’t get to choose when we meet our soulmates. It happens through serendipity, or destiny, based on divine timing. So many of us may not feel ready to enter into what we know, deep down, will be a long-term relationship. The thought of being together forever can feel claustrophobic for some people when they’re not emotionally and mentally prepared for it.

So again, the soulmate experiencing a feeling of fight or flight, takes off running. They run back to an ex that know they can walk away from because they’ve done it before. Or, they find someone new on the rebound.

They know deep down soulmate rebound relationships are safe because they don’t care about this person as deeply as they do their soulmate. They also know the person they’re rebounding with is most likely more into them. Therefore they could never truthfully reciprocate their affections.

It’s actually shocking how long they can stay in these soulmate rebound relationships.

Soulmate rebound relationships are nowhere near as chaotic, but they’re also not as passionate or fulfilling. The soulmate settles for something less intense. But the problem there’s always the lingering memory of how it felt to really love and feel such a deep connection to someone. They always know deep down they’re settling for something second rate.

If your soulmate has moved on to another relationship, chances are very high that it’s a rebound relationship. How long they stay in it varies, but there’s a good chance they will reach out to you again.