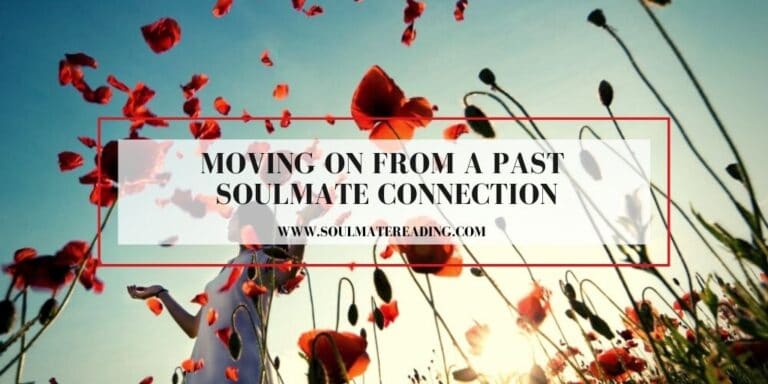 Moving on from a past soulmate connection can be challenging.

There are instances where soulmates part ways, for a myriad of reasons.

The relationship may have ended, but the soulmate connection remains. This connection makes it so much harder to move forward without them.

Soulmates often find themselves in a state of limbo, because they can’t go backwards or forwards. They simply stay stuck on a soulmate that has left their life and don’t know what to do now.

MOVING ON FROM A PAST SOULMATE

Moving on from anything, or anyone that means a lot to you, is a struggle. With a soulmate connection, it’s the hardest of all. You wish it didn’t end, especially knowing how great it could have been. This makes it hard to accept that you need to let go.

The feelings between the two of you, and the bond you shared, were special. You both agreed this connection was different than either of you experienced before. How can either of you find love again like you had for your soulmate?

Soulmates are rare. This kind of bond doesn’t happen often in our lifetimes. That’s why we’re supposed to cherish these soul connections.

We are supposed to learn and grow with our soulmate, but some lessons must be learned separately. In some cases soulmates can’t achieve the growth they need while in the relationship. This is no fault of the universe or any higher power. The responsibility lies with each soulmates choices, and sometime they choose to leave the relationship.

Once you experience a soulmate union, every other relationship you try to make work seems to be missing something. That something is the deep connection and everything that comes with it.

Many soulmates who end a relationship often think back on their past with regret. Time may have marched on but they cannot escape the connection. It can be years later, and although they may have moved on physically, they haven’t moved on emotionally.

This is why soulmates have a tendency to find one another again. It’s not difficult to see why a person who ends a soulmate relationship can’t deny the feelings they still have many years later.

WHAT IF A SOULMATE MOVES ON WITHOUT US

Your soulmate may have gone through the motions of moving on. They may not speak to you or see you anymore. Perhaps they block you on social media. They may give you every indication that it’s over between you. You may even come to learn they are in a new relationship.

Sometimes soulmates go out of their way to prove to themselves, and everyone else, they’ve moved on. Internally though, they cannot deny the connection is still present. They will do everything and anything to give the impression that they’re blissfully happy.

Deep down inside, they feel regret, and a longing for their soulmate. They may have left the relationship due to fear and currently they feel safe. Safer, but not better. Something still seems to be missing, because they can’t get as emotionally invested as they did with their soulmate. They didn’t move on to something or someone better, just safer.

Moving forward doesn’t mean you have to get into a new relationship. A new relationship can’t erase the connection between you and your soulmate. Because of this, a soulmate may still keep in contact by social media, phone, text, or email. They say the relationship is over but still want to meet up in person.

You may wonder why they would do this if they have someone new in their life? It’s because they truly haven’t moved on, that’s why. They realize they made a mistake and chances are they will try to rekindle the soulmate relationship.

They hold on because they don’t want their soulmate to move on without them. This holds true even though they are the ones that ended things in the first place!

Soulmates constantly find their way back to each other. It doesn’t matter how much time passes. When both soulmates to want to reunite they can pick up where they left off. They may both be ready, willing and able to handle the spiritual connection between them.

After addressing their fears and insecurities they now have faith. They might have married other people, raised families and divorced, yet they still feel the pull back to their soulmate.

The important lessons they learn in separation from their soulmate prepare them to get it right this time around. They know what they have been missing from their lives all these months or years. It’s their soulmate.

If you broke up with your soulmate you may believe you will never find another one. You believe their’s no point in even trying.

That is simply not true.

We can all have multiple soulmates. If it didn’t work out that doesn’t mean the universe won’t reward you with another one in the future. So don’t lose hope and don’t settle on less than you deserve.

Let’s say you met your soulmate while both of you were very young. The relationship between you didn’t stand a chance. You were both too young and not in control of your lives at that point.

One of your parents may have gotten a career opportunity in another state so your whole family had to move away. Due to that move, the soulmate relationship ended. That was not the fault of either of you. Because of that, the universe will be sympathetic. They may set it up for the two of you to have another chance later in life or they will bring another soulmate into your life at a later date.

You may not have to move on from a soulmate after all, because the relationship, like your connection, may not be truly over.