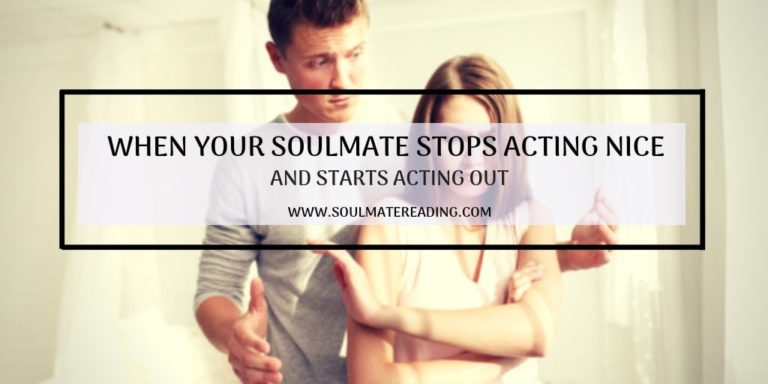 When your soulmate stops acting nice and starts acting out you feel your world has spun off its axis. When times are good between you, you’re are in heaven. The joy you feel is like nothing you have ever felt with another person before.

However, when your soulmate stops being so nice and loving, and acts out, you will feel you are in the ninth ring of hell. You wonder what causes such a turn in your soulmate. Why would they start behaving like this? Don’t they feel the connection anymore?

WHEN A SOULMATE STOPS HONORING THE CONNECTION

You begin to question if it was all real or was it all in your head. Could this have been one-sided? Could this be a false soulmate? Now depending on your situation you may have encountered a false soulmate. But keep in mind real soulmates can behave badly. And turn from Dr. Jekyll to Mr. Hyde in an instant. So why does this happen? Why would a soulmate stop acting nice, positive and loving? And instead treat you more like an enemy than a lover?

Soulmates are challenging relationships. This is not to give them a free pass to act out. But the level of emotions is spiritual unions can be too hard to handle for some. For others, the lack of control over these emotions can be very unsettling. Fear is also one of the top reasons a soulmate can turn nasty. The fear of the relationship and connection failing can make them sabotage it by acting badly.

None of these are good reasons, and you should not tolerate it when your soulmate behaves this way. You can understand where they’re coming from, but if you tolerate such behavior it will continue. You’re not stupid. You know when you have done something wrong and what the consequences of that should be. And you also know when you’ve done nothing wrong and don’t deserve any consequences at all.

Don’t let them drag your relationship down. Keep your self-respect and dignity otherwise your relationship will have no respect or dignity in it. Don’t make it a habit of excusing their bad behavior. Don’t be afraid to call them out on it either. Your soulmate isn’t stupid. They know when they’re giving you a bunch of nonsense to blame everything on you or make you the bad guy. Don’t fall for it. They know the truth and so should you.

If talking it out isn’t working, take some space and leave them alone for a while. Let them see a consequence for treating you this way. Don’t let your fear of losing them keep you from behaving like an adult and drawing boundaries. This relationship was not meant for you to accept poor treatment. What it was meant for what to make you both better people.