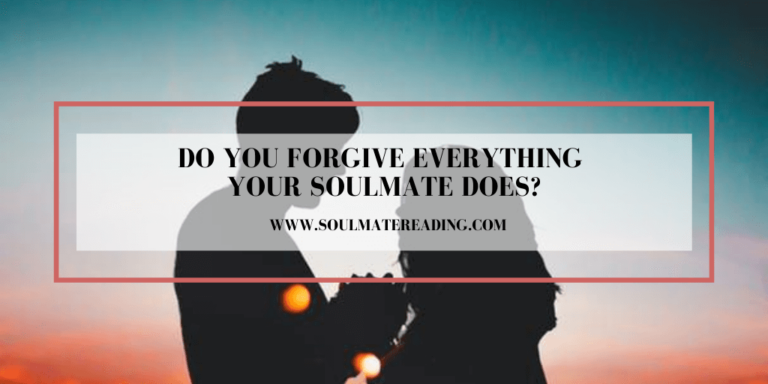 That’s a common misconception about soulmates.

It is not required that you ignore all red flags. Nor should you lower your standards or fail to enforce boundaries. If you forgive everything they do or say you may not be doing your relationship any favors.

DO YOU FORGIVE THEIR BAD BEHAVIOR?

If your soulmate is acting the fool, don’t play along with them. Yes, people do deserve second chances. But they also deserve the consequences of their actions. You shouldn’t be the one paying the price for their bad behavior.

There needs to be some responsibility on their end. If you don’t give them consequences for their actions, you’re sending a clear message. The message is what they’re doing is no big deal. You can handle it and will handle it. They have nothing to fear from you when they behave like this.

Additionally, you let them know this was not bad enough for you to do anything about it. So why should they be scared or feel guilty? It shouldn’t be a surprise to you that they’re not scared and don’t feel guilty. Talking to them, trying to get them to understand verbally that what they did is a big deal, just won’t work.

Talk is cheap. Talk rarely scares anyone and really isn’t a consequence anyone takes seriously. Don’t kid yourself into thinking your soulmate suffers when you have these long drawn out conversations their bad behavior and how much it hurt you. Those talks mean more to you than they do to them. If your words really hit their mark, or did what you intended them to do, your soulmate wouldn’t keep screwing up, would they? No, they wouldn’t.

You may think your soulmate isn’t afraid of losing you and that’s why they keep doing it. Your insecurity is telling you they don’t care enough about you. Wrong.

It’s because you repetitively show them, loudly and clearly, they can do anything and get away with it. So why should they be afraid? Past experience shows they shouldn’t be afraid, so they aren’t.

CHANGE HOW AND WHEN

You can forgive the things your soulmate does, but you might want to change how and when you forgive them. Let’s say your soulmate decided to just stop talking to you, out of the blue. And for no good reason. You went crazy wondering what you did and why they are doing this. Days, weeks, and even months go by without a word from them. One day your phone rings or a text comes in. Surprisingly, it’s from your soulmate wanting to talk.

Is your reaction to talk to them or text back right away? This is a bad idea. Why do you give them the power to decide when to turn on and off communication? Here is your teaching moment. You can either teach them that the power is all theirs when/if you two will be in contact. Or you can teach them that if they stop talking to you they better not expect you to want to talk to them.

Which one have you been choosing? If it’s the first choice, chances are they will stop communication with you again, if they haven’t already.

What you allow, will continue.

When someone is done, they don’t want to talk. When someone has truly moved on there’s nothing left to say. Even if you don’t want to move on, there’s a time and place to talk to them about it. When you agree to speak to them, you’re already in the process of forgiveness. They know that and you need to understand how they perceive you.

They know if you answer, even in a nasty way, that you’ll forgive them at some point. Once you do, it’s a countdown until they do something even worse.

You have to take control of the situation and behave like an adult who wants respect. Silence sometimes is the best answer. Let them see how it feels to be you for a while. Show them, instead of telling them. Maybe then they will get the idea and change their behavior so you won’t have to forgive them for doing the same stupid things over and over again.

3 thoughts on “Do You Forgive Everything Your Soulmate Does?”